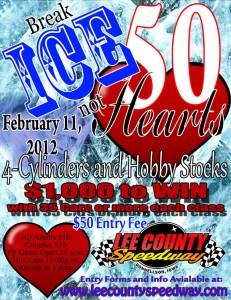 DONNELLSON, IA (Jan. 16, 2012) – The first February race in Lee County Speedway history is just under four weeks away, when the “Break Ice not Hearts 50” takes to the 3/8th mile track in Donnellson, IA.

Registration remains open for the event. Preregistration is $50 and must be received before Feb. 4. Registration after Feb. 4 will be $65.

Initial plans for the event had all tickets to be $10, but only grandstand ticket price will be $10. Pit passes will be sold for $20. An area of the pits will be sectioned off to be used as a pit pass only pit area. Drivers will still be sold a pit pass for $10 as previously announced.

Also, don’t forget that VIP booths will be available for rent on a first come first serve basis. The cost for the booth is $100 and does not include a ticket into the race.

Another clarification on rules – it has been posted for some time that no studs will be allowed in tires, but it also needs to be pointed out that no snow chains or chains of any kind will be allowed.

Any other rules questions should be forwarded to Dewain Hulett at promoter@leecountyspeedway.com or 309-331-3804.

There has been a lot of interest from bout 4-Cylinders and Hobby Stocks for the event and we look forward to it being a ton of fun. The basic race format will be the same as most tracks throughout the country with heats, b-mains and features. All drivers will draw for their initial heat starting spot.