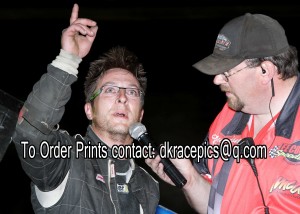 DONNELLSON, Iowa (May 25, 2012) – Hy-Vee of Ft. Madison and Keokuk, Coor’s Light and Midwest Performance brought the “Together We Fight Hunger 25 For 35” in honor of Brian Hetrick, that was supposed to be ran in mid-April, to the Lee County Speedway on Friday. When the night ended Justin Parrish ended up in victory lane and took home the $1,000 top prize for the 305 Sprints.

The first feature to take to the track on the night was the 15 lap Shottenkirk Parts Express IMCA SportMods, with Kevin Cale and Levi Smith on the front row. Smith would take advantage of his front row start to grab the lead on lap 1 over Cale. But on the completion of lap 1 Jay Kirchner would spin in turn 3 to bring out the first of four cautions on the lap. On the restart Brandon Ruffcorn spun in turn 2 to bring the yellow light back on. Then Kirchner would spin in turn 1 on the next restart to bring the caution out for his second solo to end his night. On the next restart Mitchell Boles spun in 4 and collected Jim Kuhlmeier to bring the yellow light back on. Smith would jump back out front on the next restart, with John Oliver Jr. over taking Cale for 2nd. While Smith worked to hold back Oliver Jr., Scott VanBuskirk was working his way to the front from his 9th place starting spot. The action up front was slowed once again on lap 12, as Ruffcorn spun in turn 4 for his second solo to his his night. On the restart VanBuskirk slid up in front of Smith coming off turn 4 to grab the top spot, as Smith ran into the back of VanBuskirk and lost control of his machine and spinning down the front stretch to bring out the final caution. VanBuskirk would hold on over the green-white-checkered finish to pick up his first win of the season at the track. Oliver Jr. settled for 2nd, Tony Dunker came from 10th to finish in 3rd, Cale was 4th, with Phillip Cossel rounding out the top 5.

Up next was the 15 lap Coor’s Light LCS Hobby Stock feature, with Kevin Cheney and Luke McLaughlin drawing the front row for the race. But it was 4th place starter Jake Wenig who grabbed the lead on lap 1 over McLaughlin. The event was slowed for the first time on lap 2, as a tire was clipped and moved onto the track in turn 2 to bring out the caution. On the restart Jake moved back out front and then held it until lap 3, when the next caution came out. This time it was for debris on the front stretch. On the restart Brian Hoener got into the turn 1 guardrail hard to bring out the yellow. He would climb from the car ok, but done for the night. Once again Jake jumped back out front on the restart, with Dan Wenig now following him in second. Disaster would strike both Jake and Adam Scott on lap 4, as Scott, who was running 3rd, spun in turn 1 to bring out the yellow. While Jake had over heating troubles and retired to the pits. Dan would inherit the lead for the restart and then held it until lap 11, when Victor Hastings, who came from 10th, jumped to his outside to take over the top spot. Hastings then held on over the final 4 laps to pick up the win. Dan Wenig settled for 2nd, Nathan Anders came from 11th to finish in 3rd, Cheney was 4th, with McLaughlin recovering from his lap 3 flat to come back up to finish in 5th.

Cale Samberg and Corey Strothman led the field to the green in the 15 lap Donnellson Tire IMCA Stock Car feature, with Samberg grabbing the lead on lap 1. Samberg then went on to hold the lead until lap 8, when Jeff Mueller, who started 7th, slipped under him to take over the top spot. Mueller then worked to hold back Samberg for the next 4 laps, when Abe Huls over took Samberg for second on lap 13 and then went to work on Mueller for the lead. But Mueller was able to hold back Huls on the final lap to pick up the win. Huls settled for 2nd, Samberg was 3rd, Strothman was 4th, with Matt Greiner coming from 9th to round out the top 5.

Up next was the 25 lap 305 Sprint feature, with Larry Ball Jr. and J Kinder making up the front row as a results of their 1 and 2 finish in the 6 lap dash. But disaster would strike Kinder on the drop of the green, as he got into the guardrail in turn 4 and rolled his machine. Alan Ambers had nowhere to go and ended up rolling over the guardrail to bring out the red. Both drivers walked away ok. On the restart Justin Parrish, who was moved to the front row as a result of Kinder’s roll, jumped out front to lead lap 1 over Ball Jr. Parrish then worked to hold back Ball Jr until the caution came out on the completion of lap 3. This time Chase Wanner spun in turn 2 to bring out the yellow. On the restart Parrish once again grabbed the lead, as Ball Jr worked to hold back Ryan Jamison, who started 6th. Just as Parrish started to pull away from the battle for second, another caution came out on lap 18. This time Jake Glasgow spun in turn 2 to bring out the yellow. Once again Parrish jumped out front on the restart and then held on over the final 7 laps to claim the win and the $1,000 top prize. Jamison was 2nd, John Schultz came from 7th to finish in 3rd, Daniel Bergquist finished 4th after starting in 9th, with Jarrod Schneiderman coming from 13th to round out the top 5.

The final feature on the night was the 12 lap Sunline Auto Parts IMCA Sport Compacts, with C.J. Loring and Mike Hornung Jr. leading the field to green. Loring would take advantage of his front row start to grab the lead on lap 1, but would loose it to Hornung Jr. on lap 2. Just like Loring, Hornung Jr. would only lead 1 lap, as Chuck Fullenkamp slid under him to take over the top spot on lap 3. While Fullenkamp continued to lead, Nick Wilkerson, who started 9th, was working his way towards the front. Wilkerson would try to get past Fullenkamp over the final 2 laps, but Fullenkamp was able to hold him off to claim the win. Wilkerson settled for 2nd, Darin Smith came from 7th to finish in 3rd, Scott Smith was 4th, with Kimberly Abbott coming home in 5th.

The coupons will be available at the counter of the stores beginning later today, through race time while supplies last.