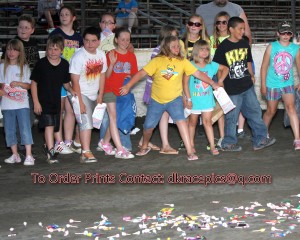 DONNELLSON, Iowa (Friday, June 8, 2012) – It was Arrowhead Bowl Fan Appreciation Night at the the Lee County Speedway in Donnellson, IA, with all fans getting in for just $5 and a candy dash for the kids at intermission. The weather provided a perfect night for racing with four repeat winners Tyler Cale (IMCA Modifieds), Matt Greiner (IMCA Stock Cars), Jim Gillenwater (IMCA SportMods) and Jake Wenig (LCS Hobby Stocks) in victory lane, while Darin Smith (IMCA Sport Compacts) was a new winner on the night.

The first feature on the night was the 15 lap Donnellson Tire IMCA Stock Cars, with Derek St. Clair and Cale Samberg on the front row. Samberg would take advantage of his front row starting spot to grab the lead on lap 1 over John Oliver Jr. and St. Clair. While Samberg worked to hold back Oliver Jr., Matt Greiner, who started 7th, was working his way towards the front. But the action up front was slowed for the first and only caution of the event on lap 5. Joe Gerdes spun in turn 2 to bring out the yellow. On the restart Samberg jumped back out front, but now had Greiner on his back bumper. Samberg, who was working the top of the track, and Greiner, who was on the bottom, raced the next 9 laps side-by-side with Samberg edging Greiner out at the line each lap. But Greiner would come off of turn 4 for the white flag and was able to edge out in front of Samberg to take over the top spot on lap 14. Greiner then held off Samberg on the final lap to claim his third win of the season at the track. Samberg was 2nd, Oliver Jr. was 3rd, Jeff Mueller came from 8th to finish in 4th, with Abe Huls rounding out the top 5.

Up next was the 12 lap Sunline Auto Parts IMCA Sport Compact feature, with Dakota Anderson and Scott Smith leading the field to the drop of the green. Anderson grabbed the lead on lap 1 over Smith, but Smith would get past Anderson on lap 2 to take over the top spot. Smith then held the lead for the next 3 laps, when Kimberly Abbott slipped under him on lap 6 to grab the top spot. After the completion of lap 6 the first of two cautions appeared on the speedway, as Chuck Fullenkamp, who was running 4th, slowed off turn 4 with a right front flat. On the restart Abbott moved back out front, with Smith and William Michel giving chase. The battle up front was slowed for the final time on lap 9, as debris on the front stretch brought out the yellow. Once again Abbott grabbed the lead on the restart, but now had Darin Smith, who started 6th, challenging her for the lead. Darin would jump to the outside of Abbott coming to the white flag to edge her at the line for the lead and then held her off on the final lap to pick up his first win of the season at the track. Abbott settled for 2nd, Scott Smith was 3rd, Fullenkamp recovered from his lap 6 flat to come back up to finish in 4th, with Michel holding on for 5th.

Tom Elsen and Jacob Smith led the field to the drop of the green in the 15 lap Shottenkirk Part Express IMCA SportMod feature. But it was third place starter Michael Joe Bliven who grabbed the lead on lap 1 over Elsen and John Oliver Jr. The first caution of the event would come out after the completion of lap 1, as Jay Kirchner spun in turn 4. On the restart Bliven jumped back out front, with Elsen working to hold back Oliver Jr. for the battle for second. Just as Bliven started to pull away from the battle for second, the second caution of the event would come out on lap 5. This time Levi Smith slowed in turn 2 with a left rear flat tire to bring out the yellow. Once again Bliven grabbed the lead on the restart, with Oliver Jr. moving past Elsen for second. Oliver Jr. tried to work under Bliven over the next 7 laps, but Bliven was able to hold him back until the final caution came out on lap 13. This time Elsen, who was running 7th, spun off turn 2 to bring out the yellow. On the restart Jim Gillenwater, who started 11th, slipped under Bliven coming off turn 2 to take over the top spot on lap 14 and then held on over the final lap to claim his third win of the season at the speedway. Oliver Jr. came home in 2nd, Tony Dunker came from 12th to finish in 3rd, Bliven held on for 4th, with Vance Wilson charging from 16th to round out the top 5.

Dane Blozovich and Dan Wenig drew the front row for the 15 lap Coor’s Light LCS Hobby Stock feature, but it was third place starter Jake Wenig who grabbed the lead on lap 1. Jake would pull away from the field, leaving Victor Hastings and Dan battling it out for 2nd. But the big lead that Jake had built up was erased on lap 8, as Ethan Thompson spun in turn 4 to bring out the first caution. On the restart Dan Wenig would spin in turn 2 to bring the yellow light back on. The next restart saw Jake jump back out front, with Nathan Anders getting around Hastings for the battle for second. But disaster would strike Anders on lap 10, when he slowed in turn 3 with a right rear flat tire to bring out the final caution of the event. On the restart Jake Wenig moved back out front, with Dan Wenig coming from the back after his lap 8 spin to grab 2nd. Jake would hold on over the final 5 laps to claim his second win in a row at the track. Dan held on for

2nd, Hastings was 3rd, Anders recovered from his flat on lap 10 to come back to finish in 4th, with Blozovich coming home in 5th.

The final feature of the night was the 20 lap Budweiser IMCA Modifieds, with Wyatt Lantz and Adam Birck on the front row. Birck would spin in front of the field going into turn 3 on lap 1 and collected Brandon Savage to bring out the yellow. On the restart Lantz jumped out into the lead over Dustin Crear and Derek Hamm. The action was slowed for the second time on lap 3, as Bill Roberts Jr. slowed to a stop in turn 1 to bring out the yellow. Lantz again moved out front on the restart, with Hamm working to hold back Josh Foster, who started 17th. Another caution on lap 6 would slow the action up front, as Andy Krieger got into Crear for the battle for 4th. Crear would end up spinning to bring out the yellow. Crear was given his spot back, with Krieger going to the back for being the cause of the caution. The yellow light would come back on twice in the next 4 laps, as each time Dane Fenton spun his machine to end his night. On the final restart Foster went to the top of the track to grab the lead away from Lantz on lap 12, with Tyler Cale, who started 7th, following him into second. Foster then tried to hold off Cale over the final 8 laps until Cale slipped under him on lap 19 to take over the top spot. Cale then held on over the final lap to pick up his second win of the season at the track. Foster settled for 2nd, Lantz was 3rd, Ryan Cook was 4th, with Brandon Banks coming from 11th to round out the top 5.

Next on the card for the Lee County Speedway is Midwest Performance Night on Friday, June 15th.

Racing action will start at 7:30 p.m, with hot laps at 7 p.m. Gates will open at 5:30 with grandstand admission for adults at $9, seniors $7 and students 11-17 $5. Children 10 and under are FREE!! See you Friday night at the Lee County Speedway for Midwest Performance Night.