By Bill Wright
for the Sprint Invaders 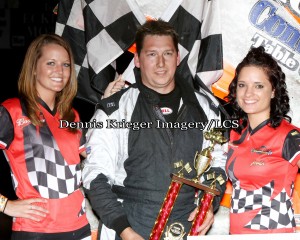 DONNELLSON, Iowa (June 21, 2012) – It was a clean sweep for Matt Sutton of Macomb, Illinois Thursday night at the Lee County Speedway in Donnellson, Iowa.  He led every lap for his fourth career victory at the 3/8-mile oval in Brockway Mechanical & Roofing Sprint Invaders competition.

Sutton won his heat, then drew a starting spot outside of row one for the Dash.  He went on to win that, and drew a one for the feature, setting himself up on the pole.

Tyler Blank shot to the lead on the first try at a start, but it was called back when Matt Krieger tipped over.

Sutton protected the low side on the second attempt, and pulled away.  Things went green until a spin by Harold Pohren collected Jordan Goldesberry on lap six.  On the restart, Sutton led Blank, Tony Shilling, Russ Hall and Justin Parrish.

Shilling was able to move by Blank into second after the restart, and things stayed green until a Travis Porter spin with three laps to go.  Shilling tried to make a last dash move on the top of turns one and two, but spun his wheels.  Blank capitalized to follow Sutton home in second at the checkers.  Shilling settled for third, ahead of Hall and Parrish.

“What a night!” said Sutton in Victory Lane.  “Chris (McGraw) has the car working and we have a handle on these Super Shox now.  This was an exact copy of when we won here in 2006.  We knew there was rubber down in the Dash.  We didn’t change a thing all night.  I’m happy we didn’t squander this opportunity.”

“I wish that first start would have stuck,” said Blank of the initial start.  “We would have won the race.  We were fast all night.  We didn’t change anything but the right rear for the feature.  I’m glad (Shilling) made the move he did, but I would have done the same.”

“I knew that if I had to risk losing a spot to win it, I would do it,” said Shilling of his attempt at the lead after the restart.  “We were tightening the car up as the night went on.”

The Sprint Invaders travel to the 34 Raceway on Tuesday, July 3.  They will run their feature from April 14, as well as a full program that evening.  Don’t miss it!