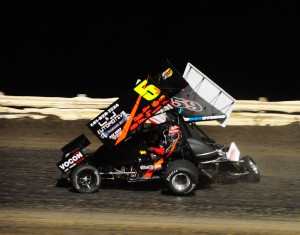 305 Sprint Cars will make there second appearance at Lee County Speedway, Friday. Action was fast and full of excitement in their first appearance.

Police officers, firefighters, 911 dispatchers, paramedics and EMTs will all get in free by wearing a t-shirt or uniform from their respective department. Lee County Speedway and its sponsors look forward to honoring the people who protect us domestically every day!

Friday also marks the next to last point race of the season, as the Pepsi Season Championship will honor racers of the past with Nostalgia Night, Friday, August 24. Old racecars, old photos and possibly some old videos will be on display under the grandstand before and during the racing action that night. All former drivers and their spouses get in free to the grandstands on Nostalgia Night, but we will need your name and contact information!

This season’s championship night will consist of a special set of heat races leading up to the final point paying feature events of the year for each class.

Jake Wenig is the current Coors Light LCS Hobby Stock point leader, as he leads his dad, Dan Wenig, by three points, 329 to 326.

Jeff Waterman, though he has not won a point paying race at Lee County Speedway, is the point leader in the Budweiser IMCA Modifieds. He leads Tyler Cale by 9 points with a total of 332 to 323. Brandon Banks is currently third in points with 317.

Darin Smith is trying to go back to back as the Sunline Auto Parts IMCA Sport Compacts champion, as he leads Chuck Fullenkamp 366 to 359.

Tony Dunker only needs to start both nights essentially to be named the Shottenkirk Parts Express IMCA Sport Mod champion. He currently holds a 41 point lead over second place running Rick Barlow, Jr., who is in a tight battle with Jim Gillenwater for the second spot. Barlow, Jr., leads Gillenwater by just four points at 344 to 340, while Dunker has 385 points. John Oliver, Jr., is a close fourth with 337 points.

The second closest points battle of year as we head down the stretch will be one man short, with a three car battling become two after the suspension of Matt Greiner. Greiner, who is currently the point leader at LCS, was suspended indefinitely last week by IMCA. That leaves a two car race for the championship, as Jason Cook leads Jeff Mueller 370 to 366. Greiner would have entered the night with 372 points, working toward his third straight championship.