by Brian Neal
Ft. Madison, IA (Saturday, January 19, 2013) – Dave and Yvonne Sapp, owners, along with Mike Van Genderen, promoter, officially put the 2012 season at the Lee County Speedway in Donnellson, IA to a close by honoring the 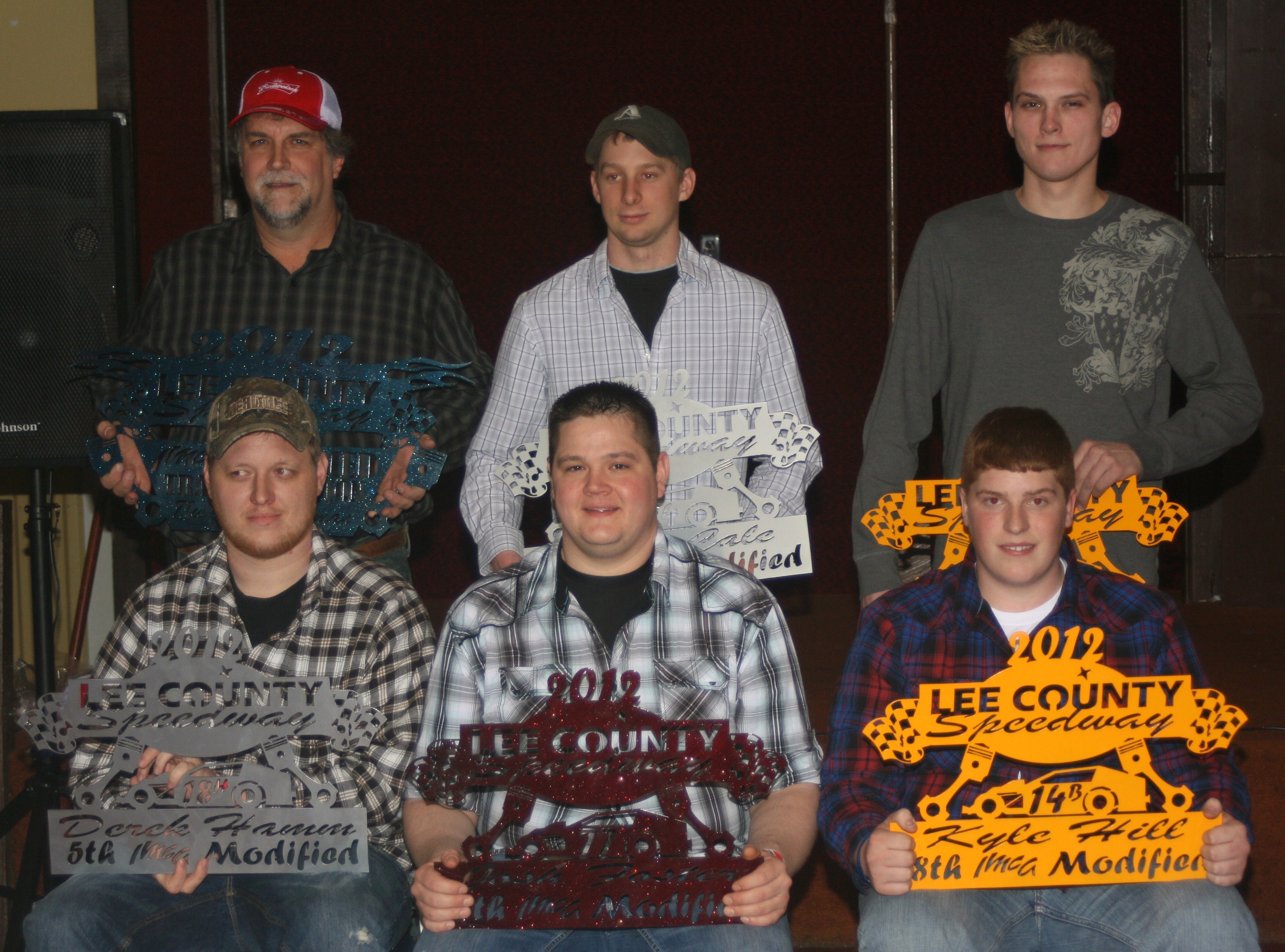 Using eight top five’s, including four wins, Tyler Cale would finish only four points behind Waterman in second. Third went to Brandon Banks, with Ryan Cook in fourth, and Derek Hamm rounding out the top five. The rest of the top ten went to Dustin Crear in sixth, Josh Foster, the defending track champion, had two wins to finish in seventh, Kyle Hill in eighth, Brandon Savage had one win to finish in ninth, with Bill Roberts Jr. rounding out the top ten.
The Donnellson Tire IMCA Stock Car division had to use a tie breaker system to determine who claimed the 2012 track championship, as Matt Greiner and Jason Cook both ended the season with 449 points. Greiner had three wins and four sec 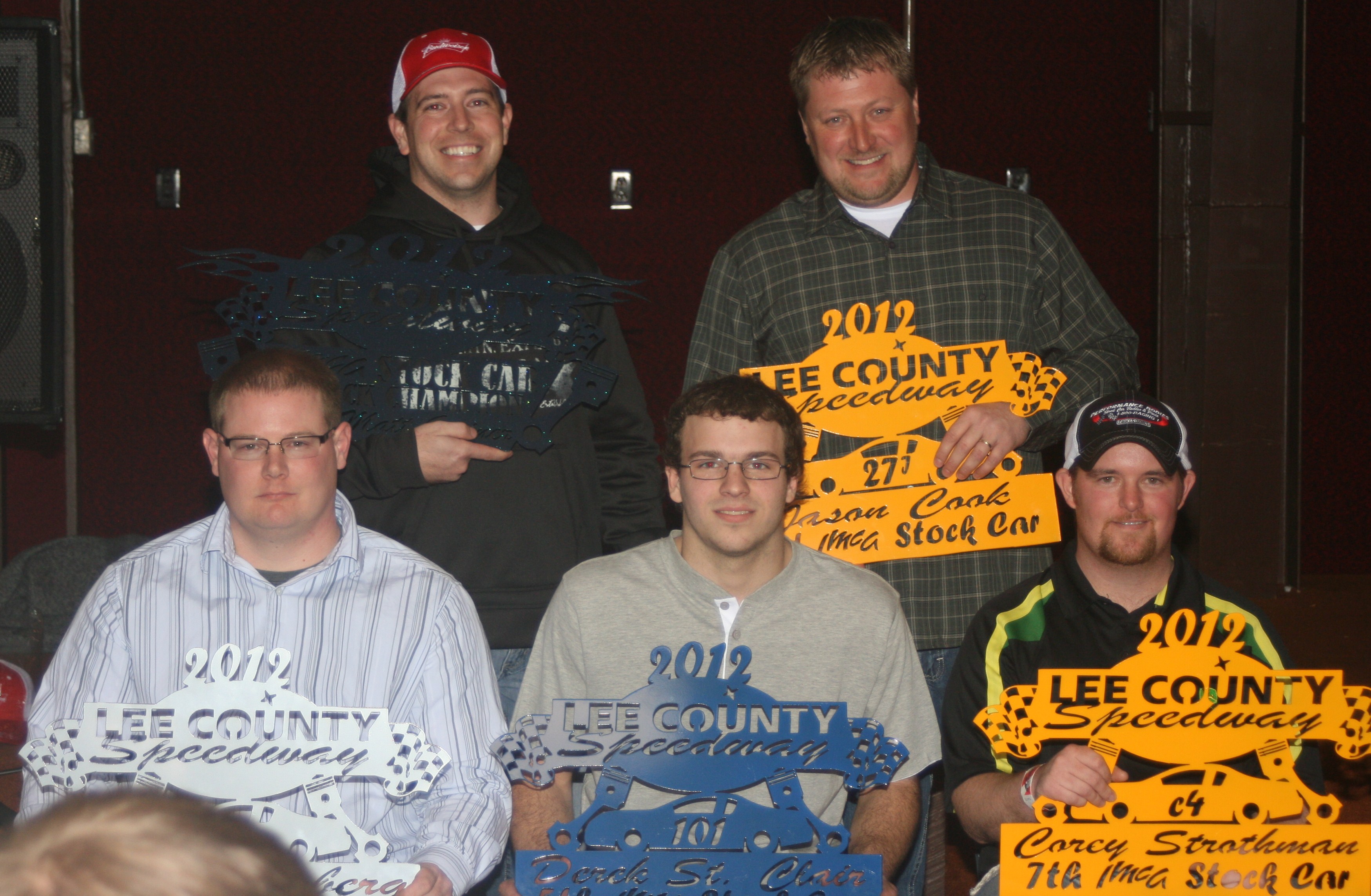 ond place finishes to claim his third straight title at the track. Cook, who also had three wins but only two second place finishes, was credited with second in points. Jeff Mueller used eight top five’s, including one win to finish third. Cale Samberg was fourth, with Derek St. Clair coming home in fifth. Rounding out the rest of the top ten was Jim Lynch, who had one win in his rookie year to finish in sixth, Corey Strothman was seventh, Abe Huls had three wins to finish in eighth, John Oliver Jr. used one win to claim ninth, with Jeremy Pundt in tenth.
Tony Dunker never finished outside the top five in twelve starts, including three wins, to pick up the Shottenkirk Parts E 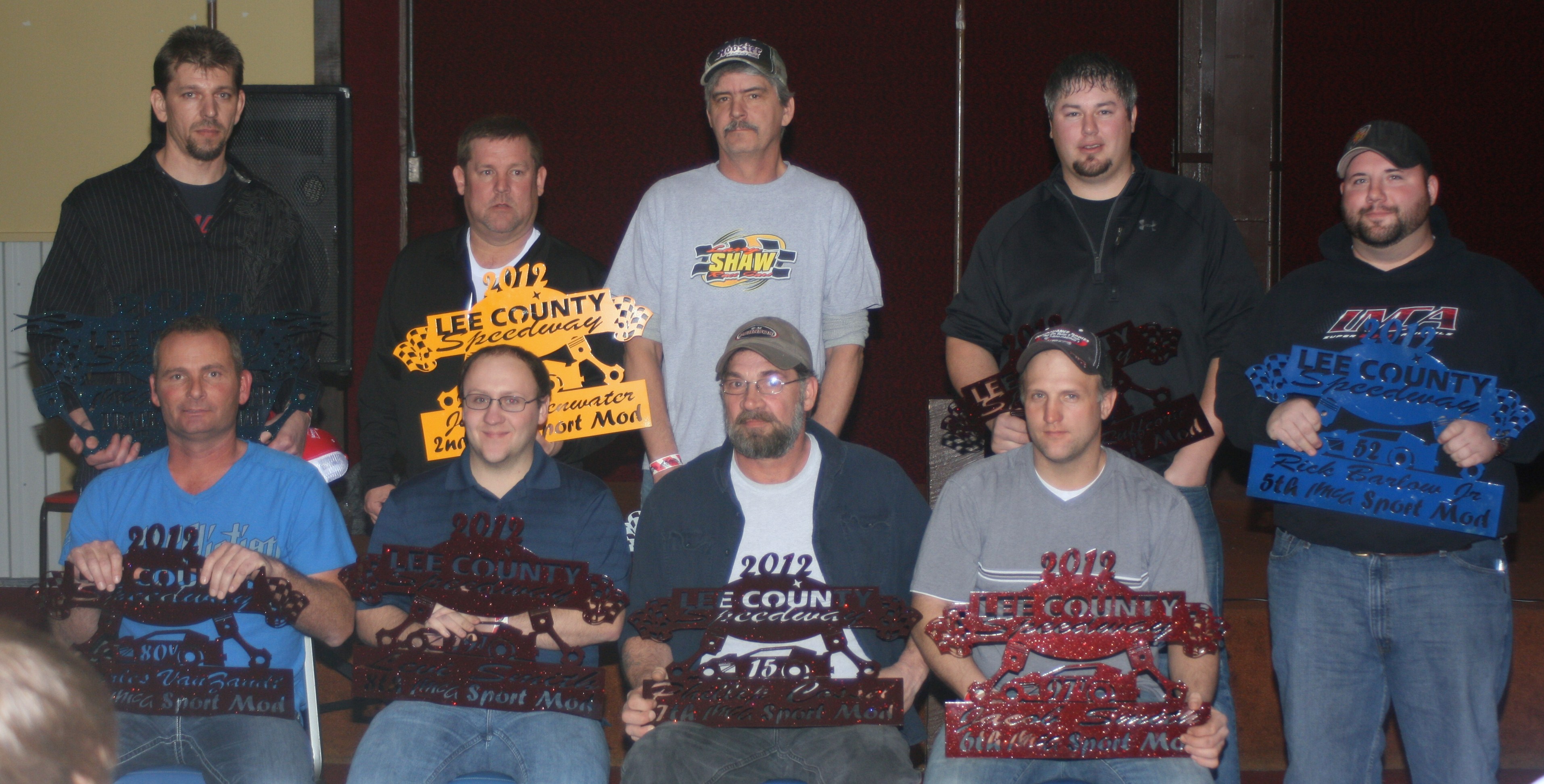 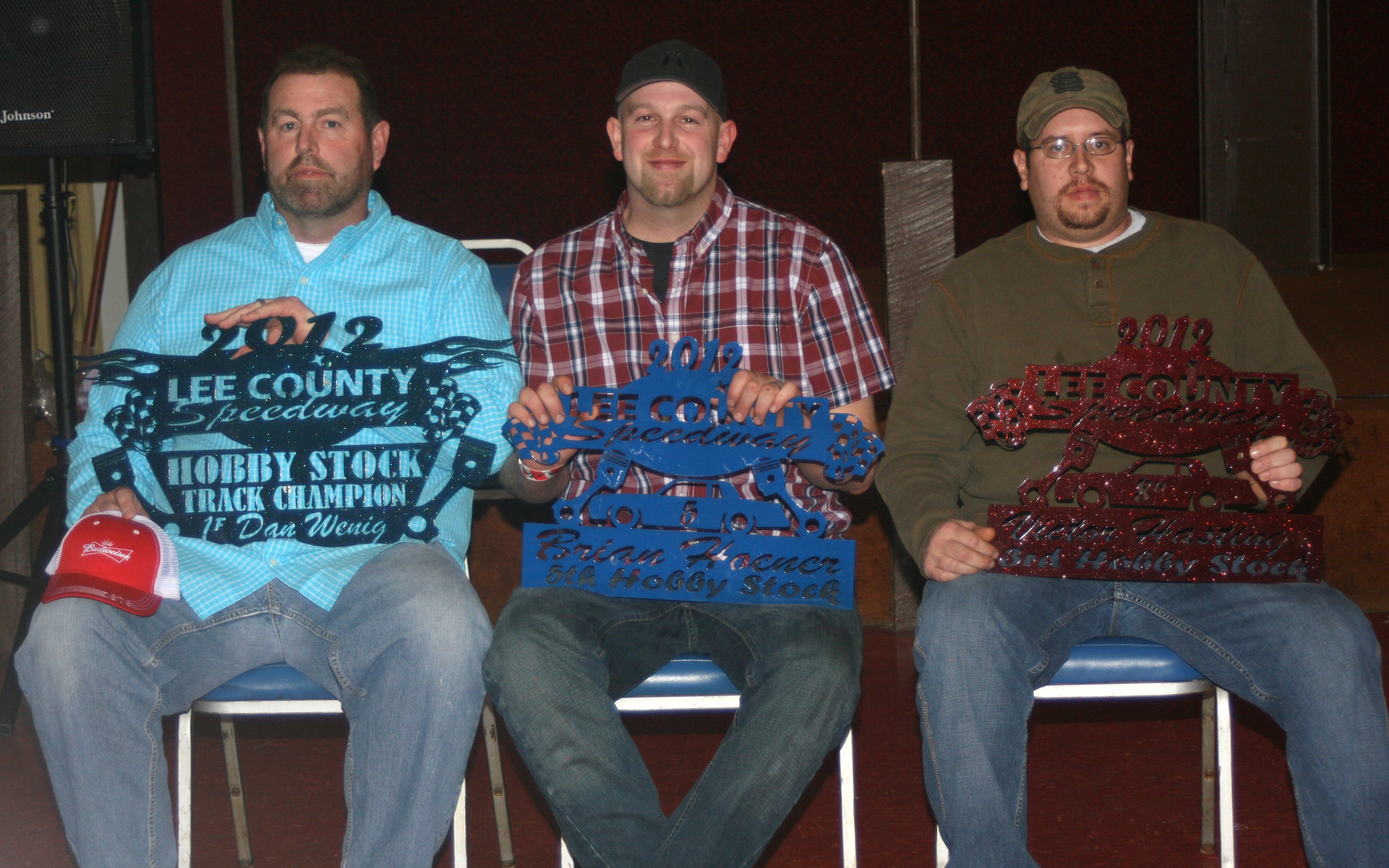 eleven starts to claim his second straight title at the track. Finishing only four points back in second was Jake Wenig, who had six wins. Third went to Victor Hastings, who had ten top five’s including two wins. Kevin Cheney was fourth, with Brian Hoener coming home in fifth with one win.
Darin Smith, the defending track champion, used seven top five’s including one win to repeat as the Sunline Auto Parts IMCA Sport Compact champion at the Lee County Sp 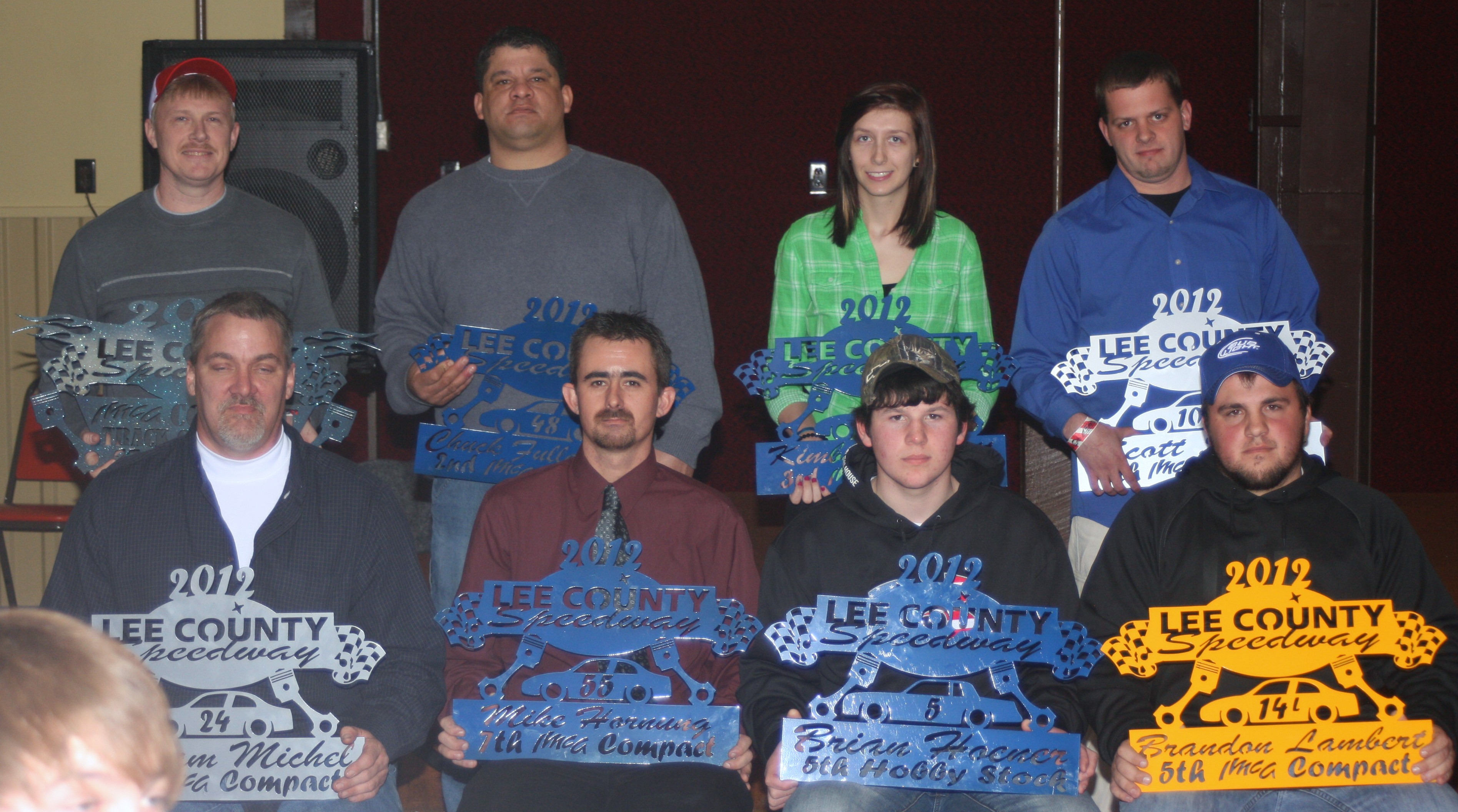 eedway. Chuck Fullenkamp, who had seven top five’s including four wins, finished only seven points back in second. Kimberly Abbott was third, Scott Smith was fourth, with Brandon Lambert coming home in fifth. Rounding out the top ten in points was Austen Becerra in sixth with one win, Mike Hornung Jr. in seventh, William Michel was eighth, C.J. Loring in ninth, with Nick Wilkerson holding on for tenth.
One special award presented by Corrie Stott to honor Steve Kirchner was handed out to Jacob Smith. Smith who finished sixth, Steve’s number when he raced, in the final Shottenkirk Parts Express IMCA SportMod points was awarded a plaque and a check for $75. 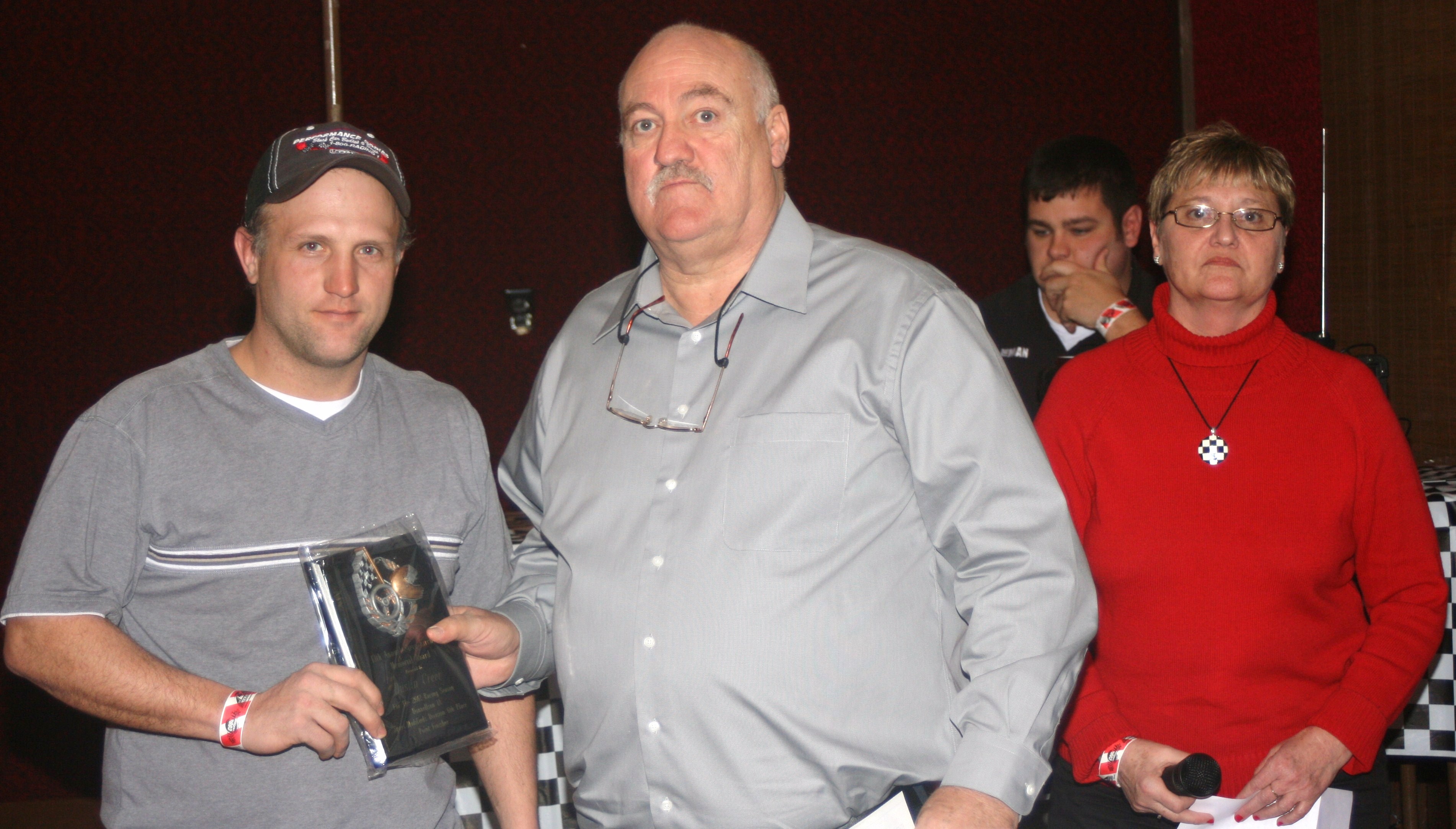 The 2013 season at the Lee County Speedway in Donnellson, IA is set to kick off on Friday, March 29th with the Spring Extravaganza. In action on the night will be the IMCA Modifieds, IMCA Stock Cars, IMCA SportMods, IMCA Hobby Stocks and IMCA Sport Compacts. More information about the up coming season will be released in the coming weeks, so stay tuned to the website at www.leecountyspeedway.com.