The first feature on the night was the 15 lap STARS Mod Lite Series, with Chase Flatt and Justin Buchholz drawing the front row for the event. Flatt would take advantage of his front row start to jump out into the lead on lap 1 over Josh May and Buchholz. The action up front was slowed for the first time on lap 6, when Gary Snyder spun in turn 2 to bring out the yellow. On the restart Flatt moved back out front, with May close behind in second. May jumped to the top of the track to edge out Flatt at the line on lap 11 to take over the top spot. Just as May started to pull away from the battle for second, another caution would appear on lap 13. This time Jimmy Halcomb, who was running 8th, spun in turn 4 to bring out the yellow. Brian Schnell would spin in turn 1 on the restart to bring the yellow light back on. The next restart had May jump back out front, with Flatt working to hold back Greg Rossell, who started 8th. May would hold on for the final 2 laps to claim the win and the $300 top prize. Flatt won the battle for 2nd, Rossell was 3rd, Andy Hennigar came from 18th to finish in 4th, with Buchholz rounding out the top 5.

Up next was the 12 lap Sunline Auto Parts IMCA Sport Compacts feature, with Matt Moore and Brandon Reu leading the field to the drop of the green flag. Just as the green was waved, the caution would appear for a bad start. On the restart Moore would jump out into the lead on lap 1 over Reu and Kimberly Abbott. Moore then started to pull away from the field, as Josh Barnes, who started sixth, worked his way into second on lap 5. Barnes then went to work on cutting into Moore’s lead. But Moore was able to hold him off to pick up his first career feature win. Barnes settle for 2nd, Michael Grossman came from 7th to finish in 3rd, Seth Woodruff started 9th and finished in 4th, with Abbott coming home in 5th. 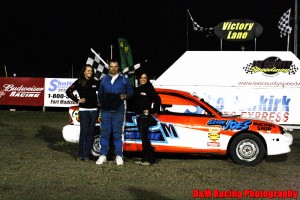 Chris Larson and Eric Flander drew the front row for the 16 lap Shottenkirk Parts Express IMCA SportMod feature, with Larson grabbing the lead on lap 1 over Flander and Brett Lowry. Larson then started to pull away from the field, as Lowry worked to hold back Carter VanDenBerg in the battle for second. Larson’s big lead was erased on lap 9, as Bradley Holtmeyer lost the drive shaft down the front stretch to bring out the caution. On the restart Larson moved back out front, with VanDenBerg now following him in second. Larson, who was running the bottom, and VanDenBerg, who was up top, crossed the line side-by-side on lap 11. VanDenBerg would take over the top spot on lap 12, while Larson had to defend second over Lowry. The final caution of the race appeared on lap 13, when Justin Alderson spun in turn 3. On the restart VanDenBerg jumped back out front, with Larson, Bobby Anders who started 7th, and Lowry racing three wide for second. VanDenBerg went unchallenged over the final 3 laps to pick up his first win of 2013 at the speedway. Larson won the battle for 2nd, Anders was 3rd, Lowry was 4th, with Derek St. Clair coming from 10th to round out the top 5. 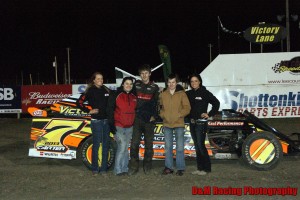 The final feature on the night was the 15 lap Donnellson Tire IMCA Stock Car feature, with Jim Lynch and Jason Cook leading the field to the green. Cook would grab the lead on lap 1 over Lynch and Abe Huls. While Cook continued to lead the field, David Brandies, who started 8th, was working his way towards the front. Brandies slipped past John Oliver Jr. for second on lap 13 and then tried to chase down Cook, who had built up a straight away lead. But Cook would hold on in a caution free event to claim the win. Brandies settled for 2nd, Oliver Jr. was 3rd, Abe Huls was 4th, with Lynch coming home in 5th. 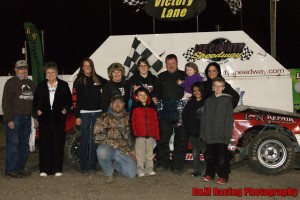 Coming up next week at the Lee County Speedway will be the 5th Annual Brian Hetrick Memorial, featuring the 305 Sprints going for a top prize of $1,000. Also on the cards will be the season points openers for the Budweiser IMCA Modifieds and Coor’s Light IMCA Hobby Stocks. The points battles will continue in the Donnellson Tire IMCA Stock Cars, Shottenkirk Parts Express IMCA SportMods, and Sunline Auto Parts IMCA Sport Compacts.

For more information about the Lee County Speedway, please visit there website at www.leecountyspeedway.com.