The first feature up on the night was the 15 lap Sunline Auto Parts IMCA Sport Compacts, with Chuck Fullenkamp and Bill Whalen Jr. drawing the front row for the event. But it was fourth place starter Adam Gates who moved to the front to grab the lead on lap 1 over Fullenkamp and Whalen Jr. The action up front was slowed for the first and only time during the race after the completion of 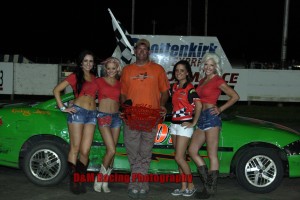 lap 1, as Jacob Tournear and Bryce Baker got together in turn four to bring out the yellow. On the restart Gates jumped back out front, with Fullenkamp and Whallen Jr. battling for second.  While Gates was pulling away from the field, Fullenkamp, Josh Barnes, Michael Grossman and Austen Becerra, who started 10th, had a great battle going for 2nd, 3rd, 4th and 5th. Gates would go on to lead all 15 laps to pick up the win, worth $200 thanks to Mike’s Barber Shop, Hornung Racing and Dunker Concrete. Fullenkamp held on for 2nd, Barnes won the battle for 3rd, Whalen Jr. held on for 4th, with Becerra coming home in 5th.

Jeremy Pundt and Brandon Savage led the field to the green flag in the 18 lap Donnellson Tire IMCA Stock Car feature, with Pundt grabbing the lead on lap 1 over Nathan Wood and John Oliver Jr. Oliver Jr. would jump to the top side of the track to make the pass of Pundt on lap 3 to take over the top spot, leaving Pundt to hold back Wood for second. While Oliver Jr. was leading the field, Jason Cook would work his way past

Pundt and into second on lap 8. Cook, who was working the bottom, and Oliver Jr., who was up top, ran the next few laps side-by-side. Cook was credited with leading lap 10 by inches over Oliver Jr. While the two front runners put on a show for the fans, Wood, Ryan Cook, who started 15th, Abe Huls and Pundt put on an even better show in the battle for 3rd. Cook would hold on over the final 8 laps to pick up the win and the $500 top prize. Oliver Jr. settled for 2nd, Wood won the battle for 3rd, Ryan Cook was 4th, with Huls rounding out the top 5.

The final feature on the night was the scheduled 18 lap Shottenkirk Parts Express IMCA SportMods, with Bobby Anders and Charles VanZandt drawing the front row for the event. Anders would take advantage of his front row start to jump out into the lead on lap 1 over Tony Dunker and Austin Schulte. Anders and Dunker were battling and even swapping the lead in different ends of the track over the next 4 laps, when the first caution came out on lap 4. Shulte, who was running 7th, spun in turn 2 to bring out the yellow. On the restart Anders jumped back out front, with Dunker going back to work on him for the lead. While Anders and Dunker swapped the lead up front, Phillip Cossel, Brett Lowry, who started 9th, Carter VanDenBerg, who started 11th, and Jim Gillenwater, who started 13th, put on a show for the battle for 3rd. The action up front was slowed for the second time on lap 12, when Robert Gould spun in turn 4 to bring out the yellow. Anders grabbed the lead on the restart, while VanDenBerg 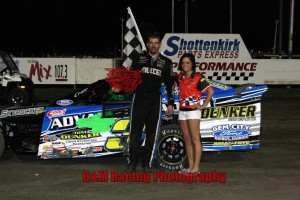 slipped past Dunker for 2nd. Just as the action up front was heating up again, the third caution of the race appeared on lap 15. This time Charles VanZandt spun to a stop down the front stretch to bring the yellow light on. On the restart Dunker was able to slip under Anders to grab the lead on lap 16, but Anders would jump to the top of the track to grab the top spot back on lap 17. After the completion of the lap VanZandt would spin his machine in turn 4 to bring out the yellow, his second solo caution to end his night. This would set up a green-white-checkered overtime finish. Dunker would once again slip under Anders on the restart to grab the lead, but once again the caution would come out before the checkered flag to set up another green-white checkered finish. Gould would spin his machine in turn 4 to bring out the final caution of the event, this was his second solo caution to end his night. On the final restart Dunker moved out front and then held on to claim his first win of the season at the track. Anders would have to settle for 2nd, Cossel would cross the line in 3rd but was disqualified in tech for a circuit board modular, moving VanDenBerg up to 3rd, Derek St. Clair came from 16th to finish in 4th, with Lowry holding on for 5th.

Coming up next Friday, June 28th at the Lee County Speedway will be All Pro Lawn and Hoenig Lawn Care Night at the races. The Shottenkirk Parts Express will have a special race, with more details being released on the website. Also in action on the night will be the Budweiser IMCA Modifieds racing for $500 to win and $100 to start, the Donnellson Tire IMCA Stock Cars, Coor’s Light IMCA Hobby Stocks and Sunline Line Auto Parts IMCA Sport Compacts.

For more information about the Lee County Speedway you can call Mike Van Genderen at 641-521-0330 or visit the website at www.leecountyspeedway.com.