by Bill W
Donnellson, IA (Thursday June 20, 2013) – Knoxville, Iowa’s Jon Agan broke through with a clean sweep of his heat, the Dash and the feature at the Lee County Speedway in Donnellson, Iowa Thursday night.  It was his first career win with the Brockway Mechanical & Roofing Sprint Invaders and paid him $1,200. 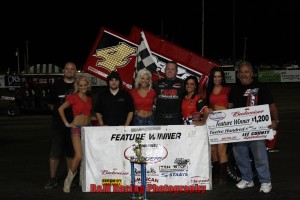 After winning the Shake-up Dash, Agan drew the pole for the feature and led right away in the 25-lapper with Russ Hall in tow.  Tasker Phillips had a folded front end with seven laps in.  It was the end of a long night after he broke down on the way to the track.  He started at the back of his heat and climbed to fifth before winning the B.

The restart saw Agan ahead of Hall, Josh Schneiderman, Dustin Selvage and Randy Martin.  Selvage shot into to third on the restart, while Agan and Hall continued to lead the pack.  They were getting into lapped traffic again with seventeen laps in the books, when Selvage came to a stop on the frontstretch.  Schneiderman, who had been running fourth behind Selvage, also retired with a flat right rear tire.

With eight laps to go, Agan held his advantage over Hall and hard-charger, Wayne Johnson, who climbed from eighteenth.  Johnson had missed the call in his heat and drove from 13th to second in the B.  Martin and Ryan Jamison followed.  Austin McCarl, Joey Moughan, Paul Nienhiser, Matt Krieger and Bobby Mincer rounded out the top ten.

“We’ve won the heat race and we’ve won the Dash before,” said Agan.  “But we just haven’t won the feature.  We wanted to make sure we did that tonight, and we did.  I have to thank my guys who work hard, and Dee Zee Manufacturing, DMB Supply, Terp’s Automotive and Ostrich Racing Engines.”

“We’re running good with these guys every week,” said Hall, who is the Sprint Invaders point leader.  “Jon just got a better start than we did.  I think that was the difference in the race.  Here in two weeks (July 3), we’re hoping to put this thing in Victory Lane.”

“We made a bonehead move missing the heat race,” said Johnson.  “It would have been a lot easier not to have to pass all of those cars (24), but we had fun.  We’ve been struggling and we’re finally moving forward, and that’s why we came here.”