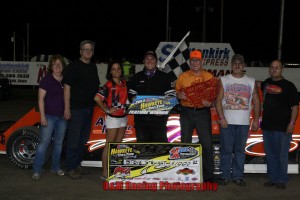 Stewart became the fourth different winner in as many Karl Performance Hawkeye Dirt Tour pre­sented by XSAN events this season, leading start to finish in the 30-lapper for IMCA Xtreme Mo­tor Sports Modifieds.

The win, his career first on the circuit, paid $1,000 and put some extra cash in Stewart’s pocket before leaving the next day on a Las Vegas vacation. Thirty-two Modifieds were in the pits for the 2013 Fast Shafts All-Star Invitational ballot qualifier at Donnellson.

Series point leader Richie Gustin qualified for the main event by winning his B” feature and made his way up to second from the 13th starting spot. Hunter Marriott, Scott Dickey and Ronn Lau­ritzen completed the top five.

NASCAR visitor Ken Schrader also came out of the “B” races and finished sixth. The only caution of the Budweiser Open Wheel Night headliner came after the first lap had been scored.

Once the race restarted, Stewart set sail and with no more cautions to bunch the field back up, drove to the win by a comfortable margin.

Gustin ran out of laps in his bid to reel in the leader. Marriott and Dickey stayed in the top five while Lauritzen made his way up from 11th starting.

Schrader was a plus nine on the night. Canadian long tow Aaron Turnbull started last in the field of 24 and finished 14th.