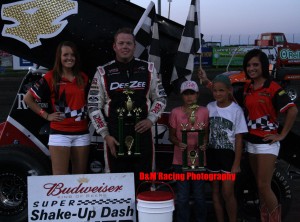 Jon Agan, who swept his heat, the Dash and the feature in Donnellson in June, led early in the 25-lapper after starting in row two.  He again captured his heat and the Dash.  On lap three, Harold Pohren spun, collecting, Dave and Damian Getchell, bringing the yellow flag.  At the time, Agan led Nienhiser Matt Sutton, Jimmy Davies and Shawn Petersen.
Davies shot under Sutton on the restart to take third.  Agan and Nienhiser separated themselves from the pack, and the latter worked his way under Agan on lap eleven, finding some rubber in turns one and two.  At the halfway point, Nienhiser led Agan, Davies, Ryan Jamison and Sutton.  Two laps later, Jamison continued his charge into the third spot. 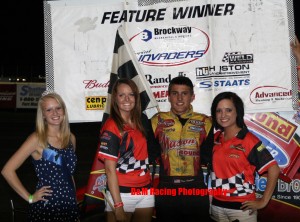 One final caution came out on lap 16, when Justin Newberry suffered a flat right rear tire. Agan made a late bid, sticking his nose beside Nienhiser on the frontstretch, but he was thwarted and Nienhiser held on for the win ahead of Agan, Jamison, Josh Schneiderman and Davies.  Bobby Mincer, Sutton, Jarrod Schneiderman, Chris Martin and Petersen rounded out the top ten.
Russ Hall, who led the points coming in, won his heat convincingly from row three.  He was running second in the Dash when his motor let go, ending his night.  Josh Schneiderman joined Agan and Hall as a heat winner.

“What it came down to…I passed five cars or so the first couple of laps,” said Nienhiser.  “That really helped.  Once I got close to Jon…my motor’s been lying down lately and getting hot…I was just able to get by him and concentrate on my motor.  We found the rubber pretty early, and all in all, we just had a great car.  I don’t know that I ever really found it in turn four.”

“It’s kind of tough to lead sometimes, and Paul did a good job finding that rubber before we did,” said Agan.  “Usually it’s game over at that point, but we rolled him back in there.  The driver screwed up twice.  First, he didn’t find the rubber soon enough, and second, he showed his nose to the leader too soon.  It’s a lot better than it could have been.  We hope to get a couple more wins with these Invaders this year.”

“It’s where we need to be when we think about points,” said Jamison.  “It was a tragedy with Russ’s car.  That kind of opens a door.  I didn’t know that the track would lay rubber as quickly as it would, but we were ready for it.  Starting in the fifth row and ending up third…I feel good about that.”

The Brockway Mechanical & Roofing Sprint Invaders are back in action on Friday, July 19 at the Jacksonville Speedway in Jacksonville, Illinois.