by Brian Neal
Donnellson, IA (Friday, July 12, 2013) – This weeks racing action at the Lee County Speedway was held during the Lee County Fair, Iowa’s Oldest County Fair, with Budweiser helping in putting on the nights activities. At the end of the night Mike Van Genderen (Budweiser IMCA Modifieds) and Phillip Cossel (Shottenkirk Parts Express IMCA SportMods) each won there first features of the season at the track, while Skipp Dunker (Sunline Auto Parts IMCA Sport Compacts) claimed his second win of the season at the speedway.

The first feature to take to the track was the 14 lap Sunline Auto Parts IMCA Sport Compacts, with Mike 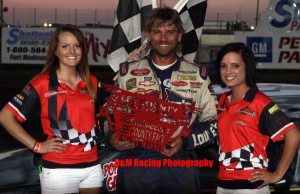 Hornung Jr. and Skipp Dunker on the front row. Dunker would take advantage of his front row start to grab the lead on lap 1 over Hornung Jr. and Brandon Reu. While Dunker set a fast pace out front, Josh Barnes, who started 5th, Kimberly Abbott and Reu had a three way battle going for second, with Hornung Jr. and Scott Smith going at it for the fifth spot. Without any cautions to bring the field back to Dunker’s back bumper he would pull away to claim his second win of the season at the track, his first since the first week back on March 29th. Barnes won the battle for 2nd, Abbott was 3rd, Reu was 4th, with Smith winning the battle for 5th.

Rick Barlow Jr. and Rob Kirchner led the field to the drop of the green flag in the 20 lap Shottenkirk Parts Express IMCA SportMod feature, with Barlow Jr. jumping out front on lap 1 over Phillip Cossel and Kirchner. The action up front was slowed for the first time on lap 4, when Jim Kuhlmeier spun in turn 2 to bring out the yellow. On the restart Cossel shot under Barlow Jr. to take over 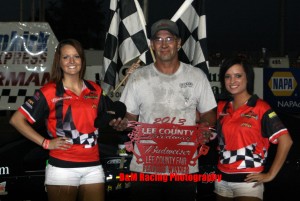 the top spot, with Jim Gillenwater, who started 7th, moving into 3rd. Gillenwater would try to slip under Cossel over the next 3 laps, when the second caution of the race appeared on lap 8. This time Robert Gould would spin in turn 2 to bring out the yellow. Cossel again jumped out front on the restart, with Gillenwater working to hold back Brett Lowry, who started 9th, in the battle for second. Lowry would slip under Gillenwater to move into second on lap 11 and then went to work on cutting into Cossel’s lead. But Coassel was able to hold off Lowry over the final laps to pick up his first win of the season at the speedway. Lowry settled for 2nd, Bobby Anders came from 8th to finish in 3rd, Carter VanDenBerg started 10th and finished in 4th, with Barlow Jr. holding on for a 5th place finish.

The final feature up on the night was the 20 lap Budweiser IMCA Modifieds, with Brandon Ruffcorn and Jeff Waterman on the front row after Justin Hill elected to go to the rear.  But it was fifth place starter Ryan Cook who grabbed the lead on lap 1 over Waterman and Ruffcorn. After the completion of lap 1 Ruffcorn’s run up front ended as he spun in turn 2 to bring out the first caution of the race. On the restart Cook moved back out front, but now had Mike Van Genderen, who started 8th, close behind in second.Van Genderen would jump to the outside of Cook to take over the top spot on lap 3, as Cayden Carter, who started 10th, worked his way up to challenge Cook for second. The action up front was slowed on lap 4, as Hill spun in turn 3 to bring out the yellow. On the 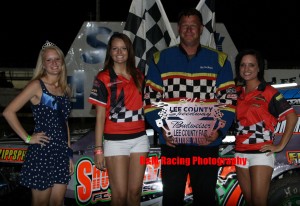 restart Brandon Banks, who was running 5th, spun in turn 2 and collected the cars of Tyler Cale and Ruffcorn. The following restart produced another caution, as Levi Smith spun in turn 1 to bring the yellow light back on. The fourth attempt of a restart saw Van Genderen jump back out front, with Carter over taking Cook for second. Just as Carter was putting some pressure on Van Genderen for the lead, the final caution of the race came out on lap 6. This time Dugan Thye spun in turn 4 to bring on the yellow light. Van Genderen once again grabbed the lead on the restart, with Carter close behind in second. While Carter tried to get under Van Genderen for the lead, Cook was working to hold back Hunter Marriott, who started 9th, and Banks, who came from the rear after his lap 4 spin. Van Genderen was able to hold off Carter over the final laps to pick up his first win of the season at the track. Carter settled for 2nd, Marriott won the battle for 3rd, Cook was 4th, with Banks recovering to finish in 5th.

Coming up next week at the Lee County Speedway in Donnellson, IA will be Fan Appreciation Night presented by Midwest Performance and Power, All Pro Lawn Care, and Hoenig Lawn Care. Grandstand admission for adults, seniors and students (7-17) will be $5, with kids 6 & under FREE! Gates will open at 5:30 pm, hot laps at 7:00 pm, and racing at 7:30 pm.

In action on the night will be the Budweiser IMCA Modifieds, Donnellson Tire IMCA Stock Cars, Shottenkirk Parts Express IMCA SportMods, Coor’s Light IMCA Hobby Stocks, and the Sunline Auto Parts Sport Compacts. The Sunline IMCA Sport Compacts will be a draw / redraw special, with no entry fees or track registration fees required. Pit passes will be $25, ages 7-13 $15, and ages 6 & under $10.

For more information about this event or any up coming events at the Lee County Speedway can call Mike Van Genderen at 641-521-0330 or visit the tracks website atwww.leecountyspeedway.com.