by Brian Neal
Donnellson, IA (Friday, July 19, 2013) – The hot and humid temperatures, plus the lighting in the area, didn’t slow down the action at the Lee County Speedway in Donnellson, IA, as it was Midwest Performance & Power, Hoenig Lawn Care and All Pro Lawn Night at the track. At the end of the evening Jeff Waterman (Budweiser IMCA Modifieds) and Brandon Reu (Sunline Auto Parts IMCA Sport Compacts) claimed their first wins of the season at the track, while Jason Cook (Donnellson Tire IMCA Stock Cars), Tony Dunker (Shottenkirk Parts Express IMCA SportMods), and Dustin Griffiths (Coor’s Light IMCA Hobby Stocks) picked up wins in there respective classes.

The first feature of the night was the 12 lap Coor’s Light IMCA Hobby Stocks, with Danny Miller and Ricky Miller Jr. making up the front row. But it was fourth place starter Jason See who grabbed the lead on lap 1 over Dustin Griffiths, who started 5th, and Andrew Hustead. See worked to hold back Griffiths over the next 8 laps, while Griffiths tried to fend off Hustead.

The top three cars would come up on a lapped car on lap 9, which Griffiths used as a pick to slip under See to take over the top spot. Coming to the white flag Griffiths got loose and slowed the momentum of See, which allowed Hustead to slip into second. Griffiths then edged out Hustead at the line by inches to claim his fourth win of the season at the track. Hustead was 2nd, See was 3rd, Danny Miller was 4th, with Ricky Miller Jr. rounding out the top five.

Up next was the 18 lap Budweiser IMCA Modified feature, with Brandon Ruffcorn and Levi Smith leading the field to the drop of the green. Smith would take advantage of his front row start to grab the lead on lap 1 over Jeff Waterman and Ruffcorn. The battle up front was slowed for the first time on lap 3, as Michael Browning slowed in turn 4 with left front troubles to bring out the caution. On the restart Waterman slipped past Smith to take over the top spot, leaving Smith to hold off Brandon Banks, who started 5th, for the second spot. 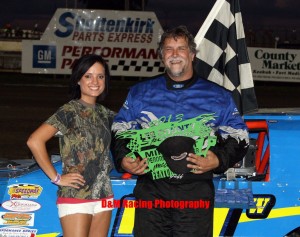 Just as Waterman started to pull away from the battle for second, the second caution of the race appeared on lap 7. This time a tire was clipped in turn 1 and thrown onto the track to bring out the yellow. Waterman once again jumped out front on the restart, with Banks slipping under Smith for second. But Banks run up front ended on lap 11, when he spun in turn 2 to bring out the yellow. On the restart Waterman moved back out front, but now had Tyler Cale, who started 6th, on his back bumper. The action up front was slowed for the final time on lap 14, when Ruffcorn spun in turn 3 to bring out the yellow. Once again Waterman grabbed the lead on the restart, with Cale working to hold back Bill Roberts Jr in the battle for second. Waterman would lead the final 4 laps to pick up his first win of the season at the speedway. Roberts Jr. won the battle for 2nd, Banks recovered from his lap 11 spin to finish in 3rd, Smith was 4th, with Ruffcorn coming home 5th after spinning on lap 14.

Les Blakley and Jim Lynch led the field to the drop of the green flag in the 18 lap Donnellson Tire IMCA Stock Car feature. But it was fourth place starter Jason Cook who jumped out into the lead on lap 1 over Lynch and Blakley. 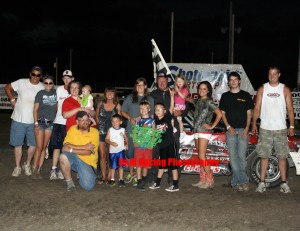 Abe Huls, who started 5th, worked his way into second on lap 3 and then went to work on Cook for the lead. But the first caution of the event slowed the action on lap 6. Corey Strothman spun his machine in turn 4 to bring on the yellow light. On the restart Cook moved back out front, with Huls close behind in second. While Cook worked to hold back Huls in the battle for the top spot, Jeremy Pundt, who started 8th, was working the bottom of the track to grab the third spot on lap 10. But the second and last caution of the event would slow the action on lap 11. This time Joe Gerdes spun in turn 4 to bring out the yellow. Cook once again grabbed the lead on the restart, with Huls and Pundt close behind. Huls got into the guardrail in turn 4 on lap 16, which allowed Pundt to slip by for the second spot. Pundt, who was working the bottom, pulled up even with Cook, who was up top, as they came to the white flag. But Cook was able to hold back Pundt at the line to pick up his fifth win of the season at the track. Pundt settled for 2nd, Huls was 3rd, Lynch was 4th, with Blakley holding on for 5th.

Trent Orwig and Jeffrey DeLonjay drew the front row for the 20 lap Sunline Auto Parts IMCA Sport Compact special. But just as the green flag was waved the caution would come out, as Skipp Dunker got sideways off turn 4 and collected Kimberly Abbott to bring out the yellow. On the restart Orwig would spin in turn 4 to bring the yellow light back on. A third attempt at a start resulted in Brandon 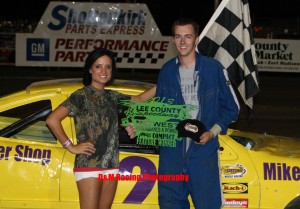 Reu, who started 5th, grabbing the lead on lap 1 over Brent Hartley, who started 6th, and Michael Grossman, who started 8th. Reu then held the top spot until lap 4, when Grossman jumped to outside to take over the top spot. But Reu wouldn’t give up, as he tried to get under Grossman over the next 9 laps only to have Grossman edge him at the line each time to hold the lead. Grossman’s run up front would come to an end on lap 14, when he pulled into the infield with mechanical troubles, giving the lead back to Reu. While Reu was leading the field, Abbott who was involved in the first caution was working her way back to the front. On lap 18, Abbott was able to get by Hartley for second and then went to work on Reu for the lead. But Reu would hold on to claim his first win of the season at the track. Abbott was 2nd and claimed the Dunker Concrete $53 hard charger award for passing 7 cars from her 9th place starting spot, Hartley was 3rd, Josh Barnes came from 10th to finish in 4th, with Dunker recovering from his lap 1 spin to finish in 5th.

The final feature of the night was the 20 lap Shottenkirk Parts Express IMCA SportMods, with Rodger Dresden and Dean Kratzer leading the field to the green. But just as the green flag was waved the caution would come out, as debris in turn 2 brought the yellow light on. The following restart saw Dresden take advantage of his starting spot to lead lap 1 over Dakota Simmons and Kratzer. The action up front was slowed for the second time on lap 2, as Robert Gould spun in turn 1 to bring out the yellow. Dresden would jump back out front on the restart, with Phillip Cossel, who started 6th, close behind in

second. But another caution on lap 4 would slow the action, as Gould spun in 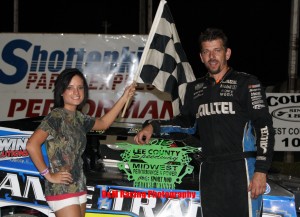 turn 2 to bring out the yellow to end his night with his second solo caution. On the restart Dresden moved back out front, but now had Tony Dunker, who started 9th, close behind in second. Dunker would jump to the top of Dresden on lap 8 to take over the top spot and then started to pull away when the final caution of the event came out on lap 15. This time debris in turn 4 would bring out the yellow light. On the restart Dunker jumped back out front and then led the final 5 laps to pick up his third win of the season at the track. Dresden finished a season best 2nd, Brett Lowry came from 8th to finish in 3rd, Cossel held on for 4th, with Dustin Crear coming home in 5th.

Coming up next week at the Lee County Speedway will be Hy-Vee of Fort Madison and Keokuk, and Miller Lite Night at the track. The Sebastian Sandblasting & Powder Coating 305 Sprints will make there final appearance of the season at the track, with a draw/redraw event. Also in action will be the Budweiser IMCA Modifieds, Donnellson Tire IMCA Stock Cars, Shottenkirk Parts Express IMCA SportMods, Coor’s Light IMCA Hobby Stocks, and Sunline Auto Parts IMCA Sport Compacts as they continue there close points battles.

For more information about the event or any event at the Lee County Speedway can call Mike Van Genderen at 641-521-0330 or visit the tracks website at www.leecountyspeedway.com.