Brandon Banks holds an 11 point lead over Bill Roberts Jr. in the hunt for the Budweiser IMCA Modified track championship. All Banks has to do is finish Friday nights feature in 12th place to tie for the title, if Roberts Jr. win the race, or finish 11th or better to earn his first track championship at the track. If those two drivers happen to end the night tied in points, Banks holds the tie breaker by picking up a feature win back on May 17th. Jeff Waterman, the defending track champion, sits tied for third in the standings with Tyler Cale. Both drivers have 314 points and are 16 points back of Banks. Levi Smith, who moved up from the SportMod class in 2013, currently holds down the 5th spot in the points. Dennis LaVeine, who has 167 points, Brandon Ruffcorn, who has 164 points, and Jeff Mueller, who has 160 points, are separated by 7 points in battle for 6th, 7th, and 8th in points. Michael Browning sits in 9th with 157 points, while Ryan Cook has a 6 point advantage over Lonnie Heap in the battle for 10th.

With the defending Donnellson Tire IMCA Stock Car track champion Matt Greiner sitting out the 2013 season, that would mean a new champion will be crowned on Friday night. Abe Huls has his own destiny in his hands, as he currently leads the standings with 347 points. Huls who has 2 wins on the season at the Lee County Speedway just needs to finish 14th or better in Friday nights feature to secure his first Stock Car title at the track. John Oliver Jr. sits second in the standings with 333 points and needs to finish Friday nights feature ahead of or just one spot behind Jason Cook to hold that spot. Because Cook, who is third with 331 points, has 4 points paying feature wins to Oliver Jr.’s 2 to hold the tie breaker if it comes down to it. Jeremy Pundt has a 4 points lead over Jim Lynch in the battle for the 3rd and 4th place in the standings. Les Blakley, Jake Wenig, Corey Strothman, Tim Anders and Ray Raker round out the top 10 in the standings.

The closest battle as far as determining a track champion is in the Shottenkirk Parts Express IMCA SportMods. Brett Lowry, who currently has 405 points, leads Carter VanDenBerg, who has 404 points, by 1 point going into Friday nights feature. Lowry must finish in front of VanDenBerg in order to secure his first track title at the speedway. If VanDenBerg happens to finish just 1 spot in front of Lowry they would end the night tied in points, with VanDenBerg holding the tie breaker with 3 wins to Lowry’s 1 win. Bobby Anders sits third in the standings with 386 points. Phillip Cossel is 4th with 344 points, with Derek St. Clair holding down the 5th spot with 332. Rick Barlow Jr. is 6th in the standings with 316 points. Robert Gould, who has 303 points, holds a 4 point lead over defending track champion Tony Dunker in the battle for 7th in points. Dustin Crear and Jim Gillenwater round out the top 10 in points.

For the first time in the history of the track a Coor’s Light IMCA Hobby Stock driver will be crowned champion, after it’s first full season at the track. Jason See currently holds that honor, as he has a 15 point lead over Andrew Hustead. With the average weekly car count about 6, that means See doesn’t even have to show up to earn the title. Hustead is guaranteed second in the standings, as he is 15 points ahead of Ricky Miller Jr., who is 3rd in the standings. Dustin Griffiths, who has won 5 out of the 9 features held at the track this season, sits 4th in the standings after missing a couple weeks due to a work injury. Dale Porter, Nick Ulin, Danny Thrasher, Erick Knutsen, and Mike Hornung Jr. rounds out the top 10 in the standings.

Another close battle to determine a track champion is in the Sunline Auto Parts IMCA Sport Compacts. Brandon Reu currently sits atop the standings, with 397 points. Kimberly Abbott is only 4 points back of Reu in 2nd place. Reu just needs to finish ahead of or 4 spots behind Abbott to secure his first ever track title. If at the end of the night they happen to tie in the standings, Reu holds the tie breaker over Abbott with his feature win that came back on July 19th. Josh Barnes, who has 364 points, sits third in the standings, with Mike Hornung Jr. 4th in points with 348. Patrick Skipp Dunker will end the 2013 season 5th in points, as he has 325 points. Michael Grossman will finish 6th in points, with Brandon Lambert 7th, Austen Becerra 8th, and Kyle Hamelton in 9th. Brent Hartley, who has 186 points, holds down the 10th place in the standings, with a 6 point lead over Derek Randall.

All heat race and feature line ups will use the point invert system, just like every weekly event to determine the starting spots. This will make for an entertaining night for all the fans in attendance, as they will get to see the drivers race for the track titles.

Joining the Budweiser IMCA Modifieds, Donnellson Tire IMCA Stock Cars, Shottenkirk Parts Express IMCA SportMods, Coor’s Light IMCA Hobby Stocks, and Sunline Auto Parts IMCA Sport Compacts on Friday will be the Illinois Midget Racing Association (IMRA). This will be the first ever first to the Lee County Speedway by the IMRA Midget Lites. So come on out this Friday to see who will be crowned the 2013 track champions, plus take in some Midget Lites racing.

Presenting sponsor Conn Communications of Ft. Madison and Keokuk, IA, plus Carthage, IL is helping to allow all U.S. Cellular customers FREE admission into the grandstands this Friday. All you have to do is present your U.S. Cellular phone at the ticket booth to get into Friday nights action for FREE! Plus don’t forget to listen to KILJ 105.5FM and 1130AM on your radio.

For more information about this Friday or any event at the Lee County Speedway, please feel free to call Mike at 641-521-0330 or visit the tracks website at www.leecountyspeedway.com. 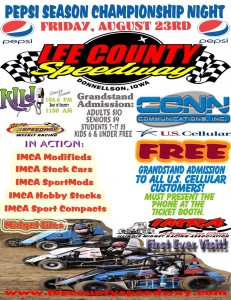