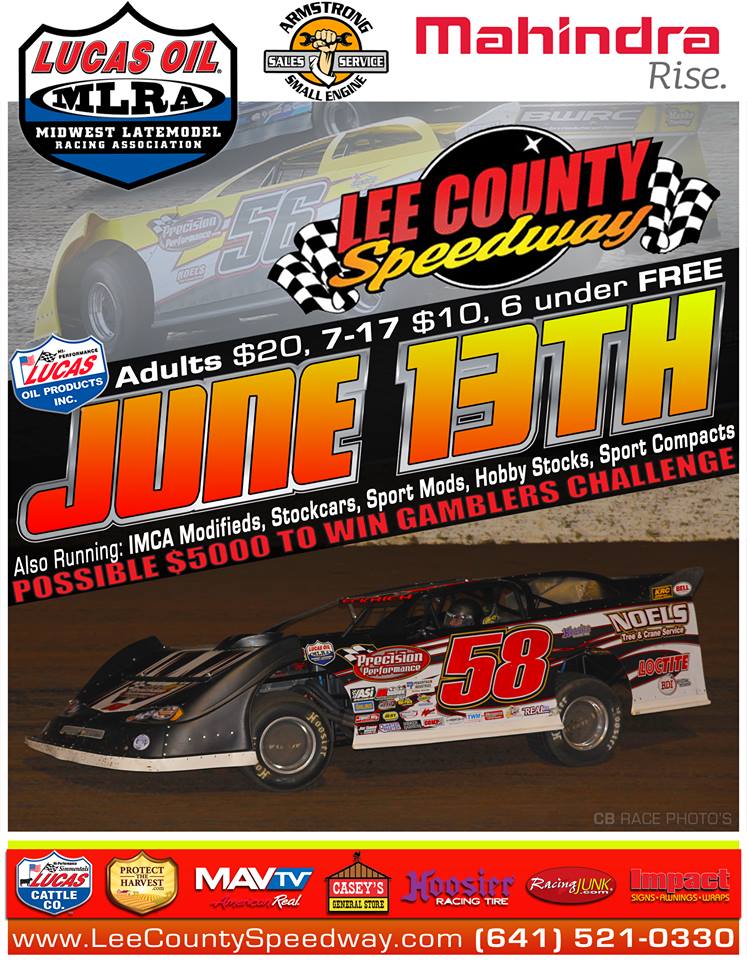 This Thursday and Friday is what Iowa race fans have been waiting for since it was announced this past winter. The Lucas Oil MLRA and Corn Belt Clash Late Models take to the Southern Iowa Speedway on Thursday, June 12, and Lee County Speedway on Friday, June 13, with hot laps around 6:45 and racing at 7:30. Both Late Model features will be 40 laps.

Many local drivers are planning on taking on the National traveling series. Drivers that are expected to attend are Chad Simpson, Travis Dickes, Terry Phillips, Jeremy Payne, John Anderson, Dave Eckrich, Scott Lewis, Tommy Weder Jr., Brad Looney, Bill Koons, Jason Bodenhamer, Chris Simpson, Jesse Stovall, Brian Birkhofer, Ryan Gustin, Jason Utter, Travis Dickes, Matt Furman, Rodney Sanders, Jason Feger, Spencer Diercks, Brandon Shephard, and John Anderson who are all in the top 15 in points in one or both series. Also got some info that we might see one or two of the southern Lucas Oil Late Model drivers not listed that aren’t following the other tour full time that might make the trip to Iowa since they have Iowa ties. These drivers will be racing for $5000 to win if they entered the Gamblers Challenge or the standard $3000 to win.

Also on the card is our weekly classes with their normal weekly program. No entry fee for those drivers or registration fees. Camping is available at both tracks. Lots of national media will be making their way to the Southern Iowa Speedway and Lee County Speedway this Thursday and Friday. Grandstand admission is $20 for adults, $10 for kids, and 6 and under free.