Donnellson, IA (Thursday, August 27, 2015) – It’s hard to believe that it is that time of the year, but this Friday, August 28th will be PEPSI Memphis Bottling Co. season championship night at the Lee County Speedway in Donnellson, Iowa. At the end of the night the Budweiser IMCA Modifieds, Donnellson Tire and Service IMCA Stock Cars, Shottenkirk of Ft. Madison IMCA SportMods, Coors Light IMCA Hobby Stocks, and Armstrong Tractors IMCA Sport Compacts track champions will be crowned for the 2015 season.

Scott Hogan currently sits atop the Budweiser IMCA Modifieds points standings, but he only holds a slim 4 point lead over Carter VanDenBerg, who is in his first year in the Modified class. All Hogan has to do is finish 3rd or better in Friday nights feature event and he will secure his first ever track championship at the Lee County Speedway. But if VanDenBerg happens to finish 4 spots in front of Hogan, then they would tie for the points lead. The tie breaker would go to VanDenBerg, as he has won 3 features at the track in 2015 compared to Hogan going winless. The defending track champion, Jeff Waterman sits third in the standings, followed by Bill Roberts Jr. in 4th, and Tyler Groenendyk rounding out the top 5. Blake Woodruff only leads Jerad Fuller by 4 points in the battle for 6th in points. Larry McConnell sits 8th, with Dean McGee in 9th. The battle for the top 10 in points is only separated by 7 points, as Andrew Schroeder currently holds down the 10th spot. But if he doesn’t race on Friday, this will give Kelly Buckallew an opportunity to move into 10th.

The Donnellson Tire and Service IMCA Stock Car points leader John Oliver Jr. only has to finish 12th or better in Friday nights feature event, and he will lock up the 2015 track title. Even if Jeremy Pundt, who is second in points, would happen to win the feature and Oliver Jr. finish 12th, which would make them tied, the tie breaker would go to Oliver Jr. As Oliver Jr. had won 3 features to what would be Pundt’s first of the season at the track. But Pundt also has another battle, as he only holds a slim 1 point lead over Corey Strothman in the battle for 2nd in points. Abe Huls and Andrew Hustead are tied for the 4th spot in points, with the highest finisher in Friday nights feature securing that spot in points. Jason Cook sits 6th, Ray Raker is 7th, with Jake Wenig in 8th. Nathan Wood, who is currently 9th, and Jim Redmann, who is 10th, are separated by 8 points in the battle for the 9th spot in points.

All Joey Gower has to do is take the green flag in his heat race and he will secure his first ever Shottenkirk of Ft. Madison IMCA SportMod track championship at the Lee County Speedway. Brandon Dale is 2nd, with rookie SportMod driver Austen Becerra 3rd in points. Robert Gould, who is 4th in points, only has a 4 point lead over Adam Birck in the battle for 4th in points. Kyle Hill is 6th in points. While Tony Dunker and Brandon Ruffcorn are tied for 7th in points, as the highest finisher in Friday nights feature will secure that spot. Austin Howes sits 9th in points. While the battle for 10th in points will be determined by who shows up to race. Phillip Cossel had shoulder surgery several weeks ago and hasn’t been able to pilot the #15 machine, which John Oliver Jr. has been driving since his absence, sits 10th in points only 3 points ahead of Bobby Six. But with Six’s work schedule he hasn’t been able to race on Friday nights over the past several weeks. So only time will tell who will show up to race for the final spot in the top 10.

Kevin Koontz doesn’t even have to show up on Friday night, as he has already locked up his first ever Coors Light IMCA Hobby Stock track title at the Lee County Speedway. Defending track champion Dustin Griffiths sits in 2nd, but only has a 3 point lead over Brandon Symmonds for that spot. If Symmonds would happen to finish 3 spots ahead of Griffiths in Friday nights feature, that would make them tied for the runner up spot in points. But with Griffiths winning 5 features on the season at the track compared to Symmonds’ one feature win, the tied breaker would go to Griffiths. Nick Ulin sits 4th in points, with Brandon Potts 5th in points. Clayton Webster holds down the 6th spot, but is only 3 points ahead of Sierra Wilsey, who sits 7th in points. Dane Blozovich is 8th in points, with Leah Wroten in 9th. The battle for the top 10 in points will come down to Mike Kincaid, Robert Fite and John Irwin, as those three are separated by 6 points.

All Kimberly Abbott has to do is finish 15th or better in Friday nights Armstrong Tractor IMCA Sport Compact feature and she will secure her first ever track championship at the Lee County Speedway. Brandon Reu who sits 2nd in points, 15 behind Abbott, only has a slim 2 point lead over Josh Barnes for the battle for 2nd. If Barnes happens to finish 2 spots ahead of Reu in Friday nights feature, this would make the two tied for 2nd in points. But the tie breaker would go to Barnes, who has won 5 features at the track this season, compared to Reu going winless. Mike Reu currently sits 4th in points, but only by 3 points ahead of Brandon Lambert, who is 4th. William Michel is 6th in points, followed by Darin Weisinger Jr. in 7th, Trent Orwig in 8th, and John Girdley in 9th. The final spot in the top 10 in points will be determined between Kyle Hamelton and Kenny Smith, as those two are only separated by 2 points.

Friday nights events will be ran just like any other IMCA weekly racing event, with the heat races inverted by the drivers points average. Then those who qualify out of the heat races being inverted by their point average for the feature. So make sure you come out to enjoy a great night of racing, and see who will be crowned the 2015 Track Champions. 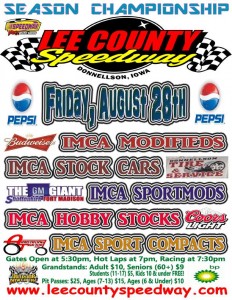