The first feature was the Armstrong Tractor IMCA sport compacts with Josh Barnes of Keokuk showing the fellow eighteen drivers the fast way to victory lane after 14 laps of action. Barnes would take the lead on lap one and never look back. Brandon Reu would battle with Brandon Lambert for the runner up spot with Rue taking second and Jake Benischek making the long pull from Durant, Iowa he finished third and fourth went to Lambert. The only major event was a red flag for Alyssa Steel and Ashton Blain getting together on the backstretch with Blain hitting the wall both drivers was okay but neither was able to continue and ended the night in the pits. 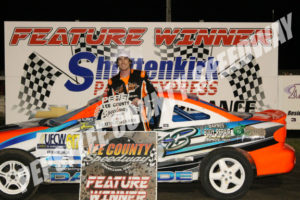 Second feature of the night was the Shottenkirk Parts Express IMCA SportMods in action going 18 laps with New London, Missouri driver Brandon Lennox drawing the pole and he paced the field to the checkers. Lennox had to hold off a stellar field and the final green, white checker restart. The second spot went to Keokuk driver Jim Gillenwater who started fourth but would spin on lap two making for an interesting run from the back to take second. The battle for third would see John Oliver jr. and Tony Dunker of Quincy battle for the third and fourth spot. Dunker would come from tenth starting spot but Oliver would hold off Dunker for third and Dunker taking fourth. 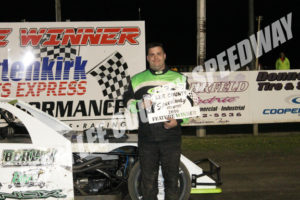 The Coors Light IMCA hobby stocks would have only four cars in action but Dustin Griffiths of Hedrick would hold of Exline driver Dane Blozovich who closed to the rear bumper several times but wasn’t able to make a pass on Griffiths. The third spot went to Brandon Symmonds of Keokuk and the fourth spot went to John Irwin of Hedrick.
In the Donnellson Tire IMCA stock car feature the crowd would get it’s thrilled with Jeff Muller of New London, Iowa who started seventeenth after problems in the qualifying heat race. Muller would work the speedway and avoid a spinning John Oliver Jr. who was running third and Muller would pass on the low line and Oliver would do a complete 360 and keep on going to finish fifth. Muller would pass Dane Fenton who paced the field the first fifteen laps holding off Greg Gill of Muscatine but Muller scored the win. Gill took second with Fenton in third and Abe Huls of Carthage, Illinois would race from twelfth to finish fourth. 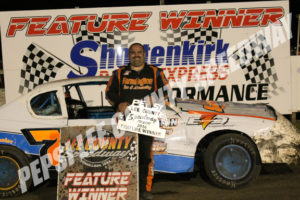 The fifth feature of the night was the Budweiser IMCA modifieds thrilling the crown for all twenty laps with slide jobs and close side by side racing each and every lap. Levi Smith of Donnellson would take the early race lead and would try holding off Jeff Waterman of Quincy, Illinois but Waterman would take over on lap twelve and would setup a battle with Dennis Laveine of West Burlington. Laveine and Waterman would swap the lead four different times with several slide jobs with Laveine scoring the win over Waterman. Laveine started 10th and his new 2016 Harris chassis was very good. Waterman took second with Blake Woodruff in third and Bill Roberts in fourth. 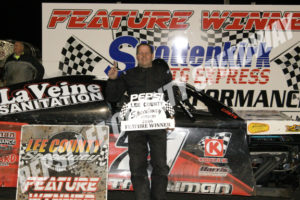 Our final feature was the Steffes Auction & Reality Service crate late models with twelve cars in action for a first year class the crowd was thrilled with the return of late models. Jeff Guengerich of Washington and Tyler Cale of Donnellson battling for the lead. Guengerich would secure the lead and would lead till Sam Halstead of New London would race his way from eight to secure the lead and Colby Springsteen of Wapello would follow Halstead the two drivers would work lap traffic with Halstead scoring the win and Springsteen taking second. Guengerich would take third which Jeff hadn’t run a late model for over four years and took a well-earned third. The fourth spot went to veteran driver Tommy Elston of Keokuk who started ninth. 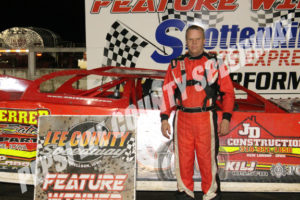 Racing action will roar back to life on April 22nd with six classes in action for night number two of points racing. Hot laps at 7pm and racing at 7:30pm at the Pepsi Lee County Speedway.