(Donnellson, Iowa) May 5th with over 131 cars checked in and fans being treated to the Lucas Oil MLRA Late Models, 38 very good drivers checked in for racing at the Pepsi Lee County Speedway. Brian Birkhofer started on the pole of the 40-lap main event lined up next to Dave Eckrich. Birkhofer would race to the early lead, even opening up a bit of a cushion over Eckrich, before the first and only caution of the race waved on lap five for Reid Millard who had spun in turn four. On the restart, Birkhofer again put some distance between himself and Eckrich but that lead would begin to shrink once Brandon Sheppard slipped by Eckrich for second on lap eleven. By lap sixteen Sheppard was in a position to challenge and after Birkhofer fought him off for a few laps, Brandon took the lead on lap twenty-one. Earl Pearson Jr., driving the Moring Disposal car #1P, soon dropped Birkhofer to third but could not make a solid run on Sheppard who was one of the few working the high line around the 3/8-mile oval. With laps winding down, the top three seemed to be locked into their positions until Birkhofer slowed suddenly and pulled to the infield with just four to go with mechanical problems. Sheppard would then close out the win with Pearson as the runner-up. Chris Simpson started fourteenth and worked his way up to third at the checkers.  Tony Jackson Jr. came from twelfth to fourth and Jesse Stovall completed the top five. Eckrich held down the sixth spot and Chad Simpson finished seventh.  Point leader, Jason Papich, used a provisional to race his way up to eighth.  Justin Kay was ninth and J.C. Wyman was tenth. 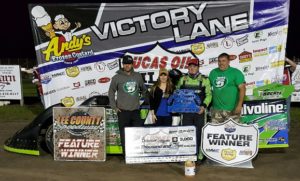 In the Shottenkirk Parts Express IMCA Sport mods, Brett Lowry would lead the first three of sixteen laps, with nearly everybody hugging the bottom line. Tony Dunker, who was doing the diamond cutter move, going in high and coming off low, gave him the momentum to drive past Lowry and into the lead. Two cautions after Dunker had actually taken the white flag delayed the outcome, but there was no denying Dunker who drove this track like a master on his way to victory. Jim Gillenwater started eighth and finished second.   Lowry slipped to third ahead of Joey Gower and Austen Becerra was fourth.

In the Steffes Auction and Reality late models, it was the largest count of the season with 21 cars checked in for $1000 to win. Tommy Elston of Keokuk, who scored the win last week, would hold the lead until lap eight when Sam Halstead powered by.   As they lapped Evans both high and low, Elston was able to get back to the front for laps nine and ten. Halstead regained the lead on lap eleven only to see the caution wave two laps later for a Gunnar Frank spin in turn four. Halstead would race away again on the restart and cruise in for the $1000 win, as the top five kept us entertained. Colby Springsteen slipped by Elston late to finish the race in second.   Jensen made the long trip worthwhile by finishing in fourth while Jeff Guengerich took fifth. Halstead is the only repeat winner in the division.

The Donnellson Tire IMCA Stock Cars were actually the first feature of the night.    Over the eighteen laps, most of the sixteen car field determined that the bottom was the preferred line and that suited Jeff Mueller just fine. Jeremy Pundt would lead the first two laps before a caution waved for Greg Gill who had spun in turn two. On the lap after the restart, Pundt, John Oliver Jr. and Jake Wenig raced three-wide off turn four.   Wenig scored the leader on lap three before Oliver took the point on lap four. Mueller had now picked his way up from eighth to second and when Oliver left him one car-width on the bottom, Mueller filled the space and took the lead on lap seven. Even with another restart on lap twelve there would be no catching Mueller who won for the third straight time here at Pepsi Lee County Speedway in Donnellson. John Oliver Jr. passed Nathan Wood on the final lap to finish second, something that Wood did himself the night before in Osky.   Gill battled back to finish in the fourth spot with Jason See taking fifth.

The Budweiser IMCA Modifieds were 23 cars strong tonight and it was Jerad Fuller moving from third to first at the start of their 20-lap feature. Kyle Brown used a freshly manicured cushion to sweep past Fuller and into the lead on lap three. A couple of cautions slowed the race during the first ten laps as Tyler Groenendyk moved to the lead on lap eleven. Cayden Carter had started eleventh, but he was now present for a challenge and he would take the lead from Groenendyk with six laps remaining.   A late caution for a Jardin Fuller spin brought the field back to Carter and Richie Gustin tried to pull a repeat of last night in Osky by making a run at Carter on the restart.  On this night though, Cayden did not flinch, holding back Gustin and taking the win. Groenendyk was the runner-up relegating Gustin back to third. Kyle Brown was fourth and Bruce Hanford took fifth.

In the Armstrong Tractor IMCA Sport Compact, Ron Kibbe would establish himself as the man to beat. On lap nine two of his chasers, Brandon Reu and Brandon Lambert,  were racing for third when a lapped car over corrected a near spin in turn two and shot up the track causing both Reu and Lambert to go for a tumble.  A red flag would stop the action with both drivers crawling out of their car uninjured.   From there, Kibbe had to fight back defending track champion Kimberly Abbott to take the win. Josh Barnes recovered from a mid-race glitch, which nearly saw him retire to the infield, to finish in the third spot while Darin Weisinger Jr. and Levi Heath filled out the top five. 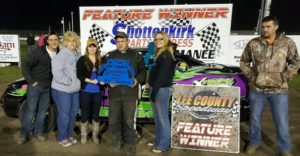 Racing action will resume on Friday the 13th at Pepsi Lee County Speedway with hot laps at 7pm and racing at 7:30pm with all six classes in action.