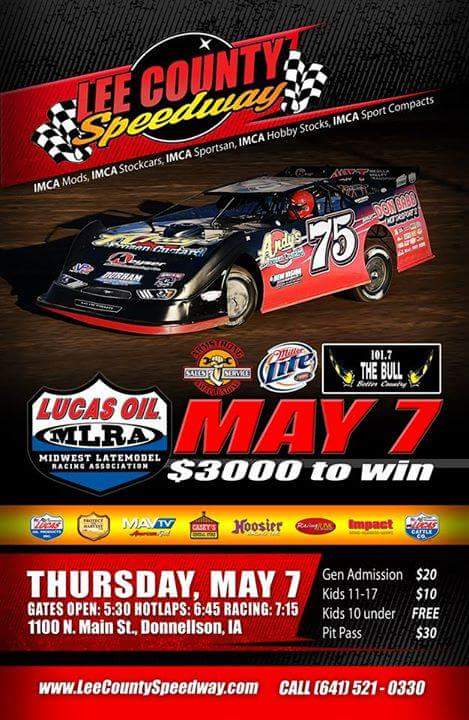 Donnellson, IA (Saturday, October 25, 2014) – What a great way to put an end to the 2014 racing season in the state of Iowa, with the annual “Shiverfest” event at the Lee County Speedway in Donnellson, IA presented by Farmington Tax and Accounting. Not only did mother nature co-operate, with temps hoovering around the low 70’s by race time. But the drivers turned out to support this event, with 172 cars signed in on the night from 5 states.

The first feature to take to the track was the 22 lap Shottenkirk Parts Express SportMod, with Brayton Carter and Joey Gower drawing the front row for the event. Gower would take advantage of his front row start to jump out into the lead on lap 1 over Carter and Austin Howes, who started 5th. While Gower set a fast pace out front, Richie Gustin, who started 13th in the Shawn Ritter #7SR machine, and Jenae Gustin, who started 11th, were making their way towards the front. Richie Gustin would take over the runner up spot on lap 6, while Jenae slipped into 4th. But by that time Gower had built up a straight-away lead, even while battling lapped traffic. It looked like there was no hope in catching Gower, that was until the first caution of the race appeared on lap 17. A tire was clipped and thrown onto the racing surface in turn 4 to bring out the yellow. On the restart Gower moved back out front, leaving Jenae and Richie Gustin to battle each other side-by-side for the runner up spot. But the action up front was slowed for the second and final time on lap 18, when Sean Wyett spun in turn 4 and collected Logan Anderson to bring out the yellow. Gower once again grabbed the lead on the restart, with Jenae and Richie Gustin close behind. Coming to the white flag Jenae Gustin, who was using the top in turns 1 and 2 and the middle of turns 3 and 4, was able to get up beside Gower going into turn 3. But Gower, who was glued to the bottom, was able to hold her off at the line to pick up the win. Jenae Gustin settled for 2nd, Richie Gustin was 3rd, Brett Lowry was 4th, with Howes coming home in 5th.

Up next was the 16 lap Coor’s Light Hobby Stock feature, with Brett Vanous and Dustin Griffiths drawing the front row for the event. Just as the green flag was waved the caution light would come on, as Quinton Miller and Bobby Greene slowed to a stop down the backstretch to bring out the yellow. On the restart Waylan Raines spun in turn 2 to bring the caution light back on. A third attempt of a start saw Griffiths jump out front to lead lap 1 over Vanous and Travis Bunnell. One lap in the books produced another caution, as Sierra Wilsey spun in turn 4 on lap 2 to bring out the yellow. Griffiths once again grabbed the lead on the restart, with Jacob Keiser, who started 7th, moving into the runner up spot. Another lap completed, lap 3, only meant another caution, as Gina Gruebel spun in turn 2 from contact from Tim Gebel to bring out the yellow. On the restart Griffiths moved back out front, with Keiser, Bunnell, Justin Wacha, who started 5th, and August Bach, who started 12th, battling for the runner up spot. The action up front was slowed for the final time on lap 6, when Raines spun in turn 4 for his second solo caution to end his night. Griffiths once again jumped out front on the restart, with Wacha over taking Keiser for the runner up spot. While Griffiths paced the field out front, Wacha, Keiser, Bach and Bunnell battle two and event three wide at times for the runner up spot. Despite a few attempts by Wacha to slip under Griffiths over the final laps, Griffiths was able to hold on to claim the win. Keiser over took Wacha on the final lap to finish in 2nd, Justin Lichty passed 12 cars from his 16th place starting spot to finish in 4th, with Bunnell rounding out the top 5.

John Oliver Jr. and Michael Peterson let the field to the drop of the green flag in the 24 lap Donnellson Tire Stock Car feature, with Oliver Jr. grabbing the lead on lap 1 over Abe Huls and David Brandies.The battle up front was slowed for the first time on lap 3, when Jason See spun in turn 1 and collected Brian Mahlstedt and Jake Powers to bring out the yellow. On the restart Oliver Jr. jumped back out front, with Huls and Brandies continuing their battle for the runner up spot. While Oliver Jr. worked to hold back Huls and Brandies for the top spot, Cayden Carter, who started 11th, moved in to the battle. Carter used the top of the track to slip past Brandies and Huls for the second spot on lap 10, and then went to work on Oliver Jr. for the lead. But the second and final caution of the race on lap 12, slowed the action up front. This time debris in turns 3 and 4 brought out the yellow. On the restart Carter went to the bottom of the track to slip under Oliver Jr. for the top spot, leaving Oliver Jr. to battle with Brandies for second. While all eyes were on the battle up front, Jason Cook, who started 9th, was slowly creeping his way into the battle. On lap 22 Cook was able to slip under Brandies for second and then went to work on Carter for the lead. Coming to the white flag lap Cook was able to get up beside Cater off turn 4, only to have Carter use the momentum off the top of the track to keep the lead. But going into turn 3 Cook went to the bottom, while Carter went to the high side. Cook then held off Carter at the line to pick up the win, that was until post race inspection. Cook was found to have illegal cylinder heads and the wrong carburetor / motor combination, which resulted in him being disqualified. This would give Carter the win. Brandies was moved up to 2nd, Oliver Jr. was moved up to 3rd, Todd Reitzler was moved up to 4th, with Andy Aultenburg, who made the trip down from Minnesota, getting moved up to finish 5th.

Up next was the 14 lap Sunline Auto Parts Sport Compact feature, with Bryan Shipley and Brandon Lambert drawing the front row for the event. Shipley took advantage of his front row start to grab the lead on lap 1 over Michael Grossman and Lambert. Grossman would use the bottom of the track to slip past Shipley for the top spot on lap 2. The action up front was slowed for the first time on lap 4, when Eric Lambert spun in turn 4 to bring out the yellow. On the restart Grossman moved back out front, with Adam Gates, who started 8th, moving into the runner up spot. Gates, who was running the top of the track, was able to grab the lead away from Grossman on lap 6 and then started to pull away from the field. But a caution on lap 12, for spin in turn 4 by Eric Lambert that brought out his second solo caution of the race, would bring the field to his back bumper. On the restart tight racing down the backstretch sent John Whalen rolling into turn 3 to bring out the red. He climbed from his car okay. The following restart saw Grossman use the bottom of the track to slip under Gates to move back out front and then held on over the final lap to pick up the win. David Helenthal came from 6th to finish in 2nd, Brandon Rue passed 9 cars from his 12th place starting spot to come home in 3rd, Gates held on for 4th, with Kimberly Abbott rounding out the top 5.

The final feature to take to the track on the night was the 25 lap Budweiser Modifieds, with Richie Gustin, in Shawn Ritter’s #7SR SportMod, and Levi Nelson leading the field to the green flag. Richie Gustin would use his front row start to grab the lead on lap 1 over Jimmy Gustin, who started 5th, and Nelson. While Richie Gustin paced the field out front, Kelly Shryock, who started 7th, and Cayden Carter, who started 11th, were using the top of the track to move towards the front. Shryock took over second on lap 10, while Carter moved into fourth. The action up front was slowed for the first and only time on lap 14, when Ryan Maitland spun in turn 4 to bring out the yellow. On the restart Richie Gustin moved back out front, while Carter went thru the middle off turn 4 to slip past Shryock for the runner up spot. Two laps later, lap 17, Carter used the top of the track to edge Richie Gustin at the line by inches to take over the top spot. Carter then held on over the final 8 laps to pick up his second win of the night and third straight at the track. Shryock was 2nd, Richie Gustin held on for 3rd, Bruce Hanford was 4th, with Tony VonDresky coming home in 5th.

Grab your blankets and head on out to Donnellson for our annual Shiverfest, Saturday, October 25th! It’s your last chance to watch hot racing action in Iowa this year, so you certainly don’t want to miss it! 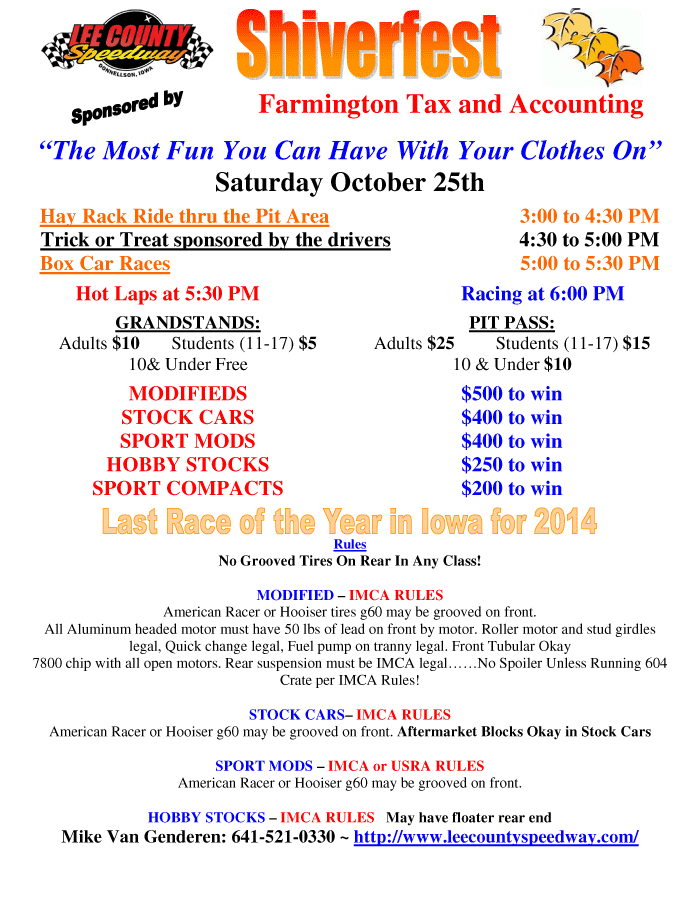 All the action will kick off on Friday, October 10th with the Modifieds, Stock Cars, SportMods, Hobby Stocks and Sport Compacts all drawing for their starting spots in the heat races, with semis being ran where needed to be. The nights action will conclude with features in all five classes.

Saturday, October 11th will be the final night. All drivers will once again draw for their starting spots in the heat races, with semis being ran where need be. Then to finish off the weekend the Budweiser Modifieds, the Donnellson Tire Stock Cars and Shottenkirk Parts Express SportMods will be racing for $1,000 to win, while the Coor’s Light Hobby Stocks will be gunning for a top prize of $500 and the Sunline Auto Parts Sport Compacts racing for $300 to win.

Camping with showers are available for the weekend. Anybody wishing to have electrical hook ups will be charged $20 per night. Those who wish to camp out can bring there campers with them on Friday and make a weekend out of it. Plus there are 3 suites available for this weekend, which can be rented for $60 for 1 night or $100 for the whole weekend. Get get your reservation in, first come first serve, you are encouraged to call Mike Van Genderen at 641-521-0330.

For more information about this event, including rules and a full payout, you can call Mike Van Genderen at 641-521-0330.

Just a reminder that Raceceivers are Mandatory for all classes at Lee County Speedway. Each driver must have a Raceceiver to compete during regular racing events.
Website hosted by Professional Computer Solutions. Solutions for your Technology needs. 800-310-4727