(Donnellson, Iowa) Racing action was hot just like the temperatures! The nights sponsor being Mohrfeld Electric and Midwest Power & Performance with seven classes in action. The added class was the 305 winged sprints coming over for their monthly visit at the Pepsi Lee County Speedway.

The first feature of the night was for the Armstrong Tractor IMCA sport compacts with Josh Barnes of Keokuk charging into the lead on lap one, he was in a tight battle with Ron Kibbe of Danville. Kibbe took over the top spot on lap two and held on as the laps clicked off. Brad Chandler of Cedar Rapids was back running in the Josh Barnes back up car 13C. He worked his way past car owner Josh Barnes and Mike Reu of Donnellson who was runner in the runner up but Chandler passed on lap six and one lap later took over the lead from Barnes. He cruised to the win, with Kibbe hanging on for second. Barnes held off Kimberly Abbott for the third spot and Rue in fourth. 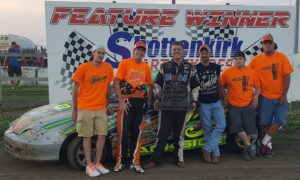 Next up was the 20 lap main event for the 305 sprint cars who are visiting once a month in 2016.  Tanner Gebhardt led the first circuit, with the yellow waving as the pack crossed the line. When racing resumed, fourth row starter John Schulz, who had rolled his # 27 sprint car in the heat race, raced up to the fourth spot on lap four. Gebhardt was hitting his marks, and had opened a nice lead by the halfway point. As the laps were winding down, Dave Getchell began to gain ground on the leader, and as the 16th circuit was scored, he had caught the Gebhardt # 81 machine with three laps remaining.  Schultz retired to the infield on lap 18, and as the white flag waved, Getchell inched ahead at the flagstand. Gebhardt then had to contend with Harold Pohren, who edged past Gebhardt for second as the checkers flew. A very excited Dave Getchell said it was his first win in 22 years! Pohren took second with Gebhardt taking the third spot.

In the Shottenkirk Parts Express IMCA sport mods the 18 lap main event was a thriller. A pair of Missouri drivers Austin Howes and Brandon Dale sat on row one, with Dale leading the first trip past the flag stand. Howes used the higher groove to lead lap two, while veteran Jim Gillenwater of Keokuk raced from the third row to the third position. Dale and Howes raced side by side on the fourth circuit, and again Howes nosed ahead on lap five. On the sixth trip around, Gillenwater eased around Dale for second. Now it was Gillenwater hugging the low groove as he usually does, with Howes running higher on the speedway. When the first caution flew on lap 13, the lead Howes had evaporated, and now Gillenwater had his chance. The veteran grabbed the lead on the restart, but stayed glued to the inside line, while Howes fought back on the top side. At the white flag, it was the 18 year old Howes back in the lead, and he held on for his first feature win. Gillenwater took second with Dale coming home third, while Joey Gower grabbed fourth. 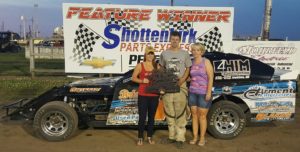 With only two hobby stocks checked in, they decided to do the Hobbys stocks and Sport Compact challenge, three sport compacts were added in with Matt Lundry of Wapello and Brad Chandler battling for the win with Chandler taking the win on the final corner and final lap.

The Steffes Auction and Realty Lee County late models were next on the card for 25 laps of action. The redraw found Tyler Cale and two time winner Tommy Elston on row one. The second generation driver Cale led the pair of laps, as fifth starting Sam Halstead slipped past Todd Frank for third. Elston used a high line to take the lead on lap six, and it now became a three car battle. As lap seven was being scored, Cale found himself near the turn four guardrail, slipping back to fourth. As the pack entered turn one, another two time winner, Colby Springsteen looped his # 38, bringing out the only yellow of the race. Back under green, Halstead was scored first by a nose on lap nine, but quickly began to widen his lead. Meanwhile, Springsteen was fighting back, entering the top five on lap 13. On lap 14, Jeff Guengerich took the third spot after racing from the seventh starting spot and one lap later Springsteen climbed to fourth. Lap 18 saw Guengerich wheel the Lynn Richard owned # 15R to the runner up spot, and three circuits later, Springsteen worked around Elston for third. Halstead kept his foot on the gas, however, claiming his third feature win of the season. Guengerich, Springsteen, Elston, and Frank turned in top five runs. Cale finished sixth, followed by Derek Liles, Charles Vanzandt, Brandon Potts, Gunner Frank, and Laine Vanzandt, eleven starting and eleven taking the checkers.

In the Donnellson Tire IMCA Stock Cars Jeff Mueller would keep his streak alive with Mueller working the bottom side of the speedway and would not look back after taking the lead on lap five. He would stay perfect on regular season point’s night with his sixth straight win. Greg Gill of Muscatine tried several times to close on Mueller but took the second spot.

The final feature of the night was the Budweiser IMCA modifieds with Levi Smith bringing the field to the green. The mods would put on a two and three wide battle with Josh Foster making the venture from Newton and last week’s winner Hunter Marriott of Brookfield, Missouri racing his way from the tenth starting spot to take the win over Foster. Foster and Jeff Waterman of Quincy, Illinois would battle for the second spot with Foster crossing ahead of Waterman who took the third finishing position.

This week will be Welch’s Insurance, McDowell Crane & Rigging, Seither & Cherry and Tri-State Sheet Metal night at the Pepsi Lee County Speedway with hot laps at 7pm and racing at 7:30pm with five exciting classes in action.